Snowdrops are so hyped up this year that the clickbait on the BBC News website’s most viewed article on Saturday morning was Are you suffering from galanthomania?. Anything that sounds like an ailment evidently has the whole of Britain (minus those aware that a galanthus is a snowdrop) clicking away to find out if they have the symptoms. Well, it is winter.

I have recorded my personal pangs here, but wouldn’t go so far as to call it a mania. Muddy knees, sometimes; mania, nope.

But I won’t try to deny that snowdrops cast spells on us. I offer just one proof: it’s almost impossible to write about them without using words such as ‘oft’, ‘of yore’ and/or ‘harbinger’. “Oft, of yore, with leaping heart I espied those harbingers of Spring, snowdrops…” – that kind of thing. I’ll try to resist.

There were a fair few snowdrops at Ness Botanic Gardens, where I took these shots. Is that prosaic enough?

I’m mocking myself as much as anyone else. If you’ve recently published a post on snowdrops and ‘oft’ or ‘of yore’ crept in, don’t go thinking I blame you. I blame some form of mass hypnotism:

I can see why galanthophile might have been coined for those keen enough to pay £1,400 for one. Snodrophile would have been a bit too belt, cap and braces for anything that small worth more than a tenner. 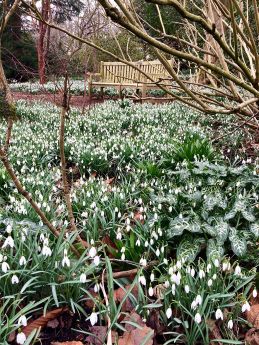 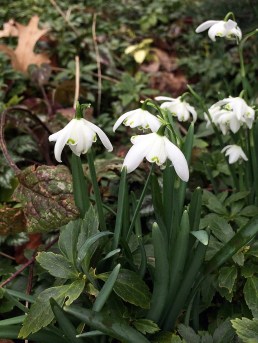 Galanthophile, in contrast, has a delightful rise and fall. It’s the word version of the Lipizzaner horses trained to bob around the show ground, presenting their knees for our approval.

Galanthophile has something of excess about it. It’s the type of word that might appeal to someone who saw nothing silly in naming the common double one Galanthus nivalis f. pleniflorus ‘Flore Pleno’. My own belief is that the name is only suitable for snowdrops with just two rows of petals. Anything fully double should be called Galanthus nivalis f. pleniflorus ‘Flore Pleno, Yeah, Yeah, Yeah’, just to make sure we get the point.

Although Galanthus nivalis ‘Bouffant’ would be more descriptive.

It’s surely a scandal for any of these snowy flowers – little more than buds at their fleeting best – to be worth that much, even the cute ones with the little green smudges.

Imagine buying the £1,400 one and coming home to find it had been nibbled by a slug… though we all know a slug would devour it and leave nothing but the slime.

It takes all sorts, but I’d be inclined to swop the most expensive ones for a drift of the common ones and plant a few hellebores to go with them.

On a more serious note, Ness Botanic Garden was looking wonderful earlier this week, with the snowdrops at their peak. They have masses of singles and doubles and quite a few fancy ones. If you get half a chance, brave the cold weather and go and get your heart uplifted.

34 Replies to “Snowdrop-aholics in the news”