This post about hardy geraniums, popularly called cranesbills, (not the pelargoniums) is the second in my series on companion plants.

What are companion plants?

Companion plants complement the showy ornamentals society loves – roses, peonies, delphiniums and hollyhocks – filling in the gaps in the flower border and helping it flow. They’re pretty enough on their own terms and happy to mingle in, above or below other plants. Good neighbours, they will not compete too aggressively for food, water or space.

Their presence encourages a healthier ecosystem by attracting beneficial insects which is why companion plants are often recommended for kitchen gardens. To find out more about what makes a plant a good companion, check out the first post in the series, on astrantias.

If you show me a decent sized English garden that doesn’t have a geranium, I’ll show you a garden that is missing a trick. Suppliers variously describe them as forgiving, easy, undemanding, generous and enduring. I don’t have a horse in the race, but I’d agree with them.

The main reasons to grow hardy geraniums as companion plants include their:

Writing about astrantias as companion plants was straightforward as they are broadly similar in flower, leaf, height and habit. Geraniums are another kettle of fish – their characters and habits are varied.

As I was writing the bullet points above, exceptions were springing to mind. I ended up imagining a series of job interviews for geraniums for a vacant spot in the garden at the stage when candidates are asked to share their weaknesses. 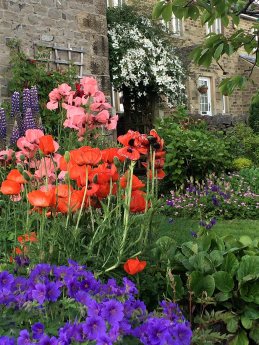 Geranium x magnificum (one of my favourites) would explain it only flowers once each year, but is guaranteed to get the season off to a magnificent start.

The oxonianums ought to admit that, as they are such good mixers, they cross easily and their myriad seedlings may be bland and/or straggly.

In their defence we can hand-pluck any nondescript seedlings out of the ground after they first flower and their straggliness is nothing a pair of shears won’t sort out in 20 seconds.

Geranium psilostomen should confess that if it is left for a decade or so to settle in then you ask it to redeploy elsewhere, you’ll struggle to shift it. On the plus side, it’s more than a match for other powerful personalities in the border such as yellow loosestrife (Lysimachia punctuata).

Geranium macrorrhizum should say it will gradually smother a low wall if invited to tumble over it and suggest interviewing a Geranium dalmaticum if you’re looking for something daintier (but who’s going to do that in an interview?) Take a close look at this screen shot from the Geranium macrorrhizum entry in the RHS plant database:

Can you imagine any plant being less fussy about where we choose to put it?

Geranium ‘Buxton’s Blue’ might observe that the gardening elite thinks it is too prevalent to be fashionable, but that attests to the power and allure of its blue (and white) eyes. On the other hand, Geranium ‘Mrs Kendall Clarke’ could point to her enduring popularity at flower shows and claim she has no weaknesses at all.

Monocarpic Geranium maderense should say it is tender so needs winter protection and will take some time to get around to flowering, when it will astonish everyone with its glory and fade away so you’d better have a succession plan in place.

All geraniums could with justification claim they are too nice, too modest, too easy to overlook for promotion to one of the best garden spots, but that given a chance, they’d shine.

This isn’t all fantasy. The sheer number and variety of hardy geraniums for sale in the UK – species and named varieties – can make choosing seem tricky. We’re talking here about hundreds of species and thousands of named varieties ranging from 15 cm (6 in) or so high to 1.25 m (4 ft) plus.

I had intended to link to the RHS’s Award of Garden Merit list, usually a good place for UK gardeners to start, but a glance through the 47 geraniums listed prompted me to wonder how recently the list has been updated. A scientific assessment of all the varieties available would be a big ask, and would not repay the resources needed to do it.

When all’s said and done, choosing a hardy geranium that will grow for a UK gardener isn’t one of gardening’s most difficult challenges. Pretty much any you see for sale will do just fine in our mild, moist climate. Pick from white, purple, blue, lavender or pink. By all means research to find out which varieties will be happy in your conditions. 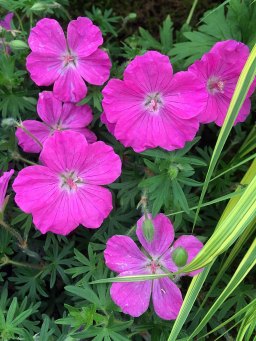 A lot of information can be found on the label or online catalogue, but it’s always good to see a well-established plant to get a feel for its habit.

Remember that the first rule of selecting almost any type of plant is to check the height and spread on the label.

Once you’ve sourced the ones you want, by and large the only gardening required for hardy geraniums is to plant them. Trim back the spent flowers if you prefer to keep things tidy, and wear a smile as you do it, knowing most geraniums will repeat flower better in response. Split the vigorous ones when they show signs of venturing somewhere you’d rather they didn’t. 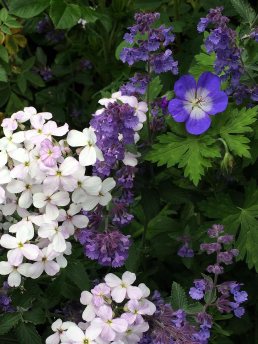 Geranium with nepeta and stocks

“Simples”,  as the meerkats would say.

29 Replies to “Great Companion Plants For a Cottage Garden: Geraniums”