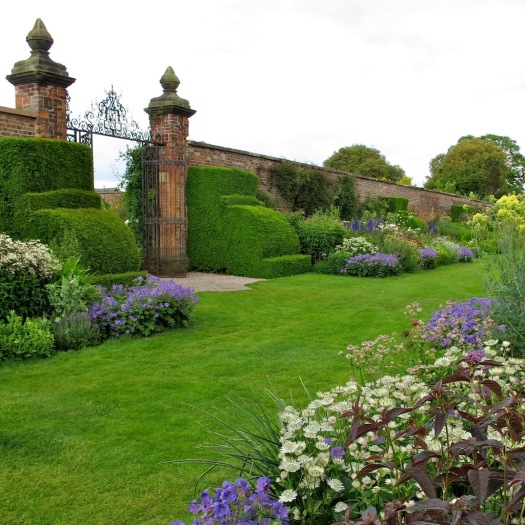 First, What is a companion plant?

Plant society members often think of their ‘pet’ plants as the stars of any border: flowering perennials, shrubs, trees and climbing plants that are guaranteed to turn heads. Think of peonies, roses, hydrangeas, day lilies, dahlias, delphiniums, hollyhocks, or even topiary as in the picture of Arley Hall, above.

Companion plants are the ones with a supportive role. They are chosen to complement the feature plants, contrasting or harmonising with them, in colour, texture or form. I can’t imagine a traditional herbaceous border without companions to fill in the gaps and create a tapestry effect. While companions add to the richness and diversity of the garden, they will not compete too aggressively for the limelight or for resources such as food, water or space. They create a healthier ecosystem by attracting beneficial insects.

Many of my favourite companion plants are long-flowering, allowing the garden to transition seamlessly from one season to another. You might have overlooked every one of the companion plants I’ll be highlighting in this short series of posts, but I believe they’re worth their moment in the spotlight.

Astrantias are such useful, trouble-free companion plants that you’d be hard pressed to find a major English garden without them. Masses of small umbels are held airily on wiry stems like a profusion of stars, as their Latin name suggests. The intricate, lacey flowers are encircled by papery bracts of varying lengths.

Masterwort, the common name, hints at its use in traditional medicine. Other folk names include Hattie’s pincushion and Gentleman’s melancholy. I get the pincushion reference but am puzzled by the latter. They always seem cheerful to me – but perhaps that’s because I’m not a gentleman.

Astrantia, shown here forming a backdrop to knifophia, is a bullet-proof choice for the mild, moist English climate, but gardeners in more extreme climates should note that it can be finicky. It is happiest in humus-rich soil in dappled shade, and doesn’t like to dry out completely or to endure a succession of very hot nights. I sympathise!

Luckily, it’s one of those communicative plants that wilts in a theatrical fashion, signalling its distress with such a clear SOS that even a half-attentive gardener can’t help but notice and take action. A prompt and liberal application of H2O is usually all it takes to set the droopiest-looking plant to rights.

Astrantia is a community spirited plant. During its long flowering season, this clump-forming perennial can usually be seen entertaining at least one insect, and more often, a buzzing party of pollinators. Rarely the star of the border despite its many charms, it will gradually fill the space allotted to it without appearing hell-bent on smothering its neighbours. It’s easily divided in late autumn or winter if you need to maintain a little balance – or would like more clumps to spread around the garden and to pass along to friends.

As with most repeat-flowering plants, any time you invest in trimming back the spent flowers  will repay you by stimulating new flowers; keeping the plants looking neat and helping to prevent a profusion of seedlings from springing up. If you prefer a low-maintence garden, it’s fine to leave them to their own devices during the summer as many gardeners do, trimming the foliage back in winter or spring.

Astrantia major and Astrantia maxima hybridise readily and the seedlings vary. The richest colours and most unusual plants are propagated by division. Some of my favourite cultivars include the dark-flowered ‘Ruby Wedding’ and ‘Hadspen Blood’; ‘Roma’, a pink; and ‘Shaggy’ an ivory with attractive, green-streaked bracts. If you like variegated plants, check out Astrantia major ‘Sunningdale Variegated’ which has heavily cream splashed leaves.

New cultivars such as ‘Ruby Star’ have been appearing to rave reviews, though I note a few of the other recent releases have garnered the less effusive ‘it looks much the same as the others to me’ type of comment from some of their reviewers. My view is that you won’t go far wrong with any astrantia if they will grow in your climate and you like the overall look. For advice about caring for astrantia and a useful comparison of varieties, take a look at the Dorset Perennials website.

While astrantias on their own might not light your fire, they mingle so readily with other plants that I can’t imagine there are many major English gardens without a few tucked here and there. They make a good choice for cutting gardens too – I love the way they help give a bouquet of flowers that freshly cut from the garden character.

For gardens in partial or dappled shade, where the sun-loving prima donnas sulk and underperform, astrantias may well become the stars, adding a splash of welcome colour. And it was wonderful to see claret-red astrantias sparking like jewels in full sun in Piet Oudolf’s naturalistic planting of grasses, seed heads and flowering perennials at Scampston Hall this weekend (see below).

In the war many English gardeners wage against plain old soil, they’re a potent weapon. They have all the qualities of the perfect companion plant. They’re pretty enough on their own terms and happy to mingle in, above or below showier plants. The pictures were taken at Arley Hall and Gardens, Gresgarth Hall, Harlow Carr Garden, Hidcote Manor Garden, The Saville Garden and Scampston Hall Gardens: that’s quite some recommendation!

This is number 1 in an occasional series I’m planning about my favourite companion plants. If you have your own favourites, please feel free to share them below.

37 Replies to “Great Companion Plants For a Cottage Garden: Astrantia”