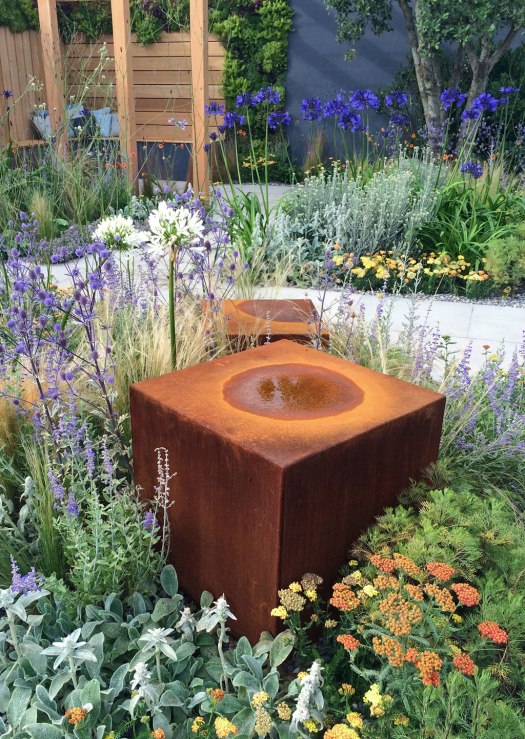 The Royal Horticultural Society is working hard to encourage young talent into the gardening profession and it’s great to see their efforts paying off. The gardens that caught my eye at this year’s RHS Tatton Park Flower Show were created by designers under the age of 28, competing in two newly launched categories that extend the RHS’s influential Young Designer Competition.

Three finalists for the title of Young Landscape Contractor had been paired with Young Planting Designer finalists to create show gardens based on the same design brief, drawn up by last year’s winning Young Designer, Tamara Bridge.

The designers took full advantage of their moments in the spotlight. All three gardens received RHS gold medals – no mean feat, as many highly experienced designers can testify.

I wish I’d read up on the rules beforehand as it would have been fun to compare the gardens from the same camera angle to highlight their interpretations. The planting and accessories had so much influence that I hadn’t realised the teams were using exactly the same hard materials. It’s hard to believe even now, looking back, although the slender wall-hung waterfall and the light coloured flagging were impossible to miss. 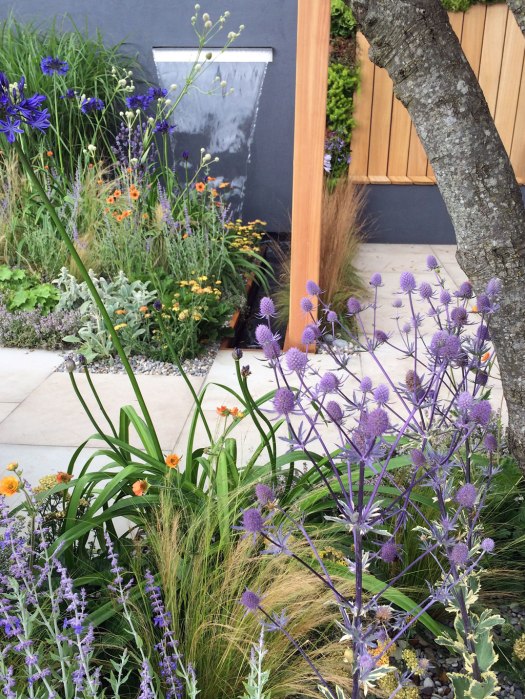 The garden I spent most time admiring (and the one pictured here), Coastal Retreat, was built by Ewan Sewell who won Young Landscape Contractor and Best Construction award for his efforts. But it was his partner Lydia Knight’s planting that drew me back for a second and third look.

Show gardens can sometimes feel ordered and manicured when the ‘every leaf and petal in its place’ syndrome kicks in: a natural response to the drive to make sure everything is just so by the time the judges materialise, holding their clip boards and allocating scores.

Beneath the scales and measures of perfection, a show garden needs spirit – something that makes you feel finding it in a show is just a quirk of fate: that this living, changing garden would be much happier as a home for people, birds, insects and worms.

I loved Lydia’s sensitive use of colour and her confidence in selecting the shrub with twiggy, lichen covered branches; I loved the warmth of the gold and terracotta achillea that gleamed against the cool, rich purples and silvers. Though this was a new garden, the planting had a feeling of movement – not windswept exactly, but with hints of wildness and toughness to complicate the tameness of a pedigree show garden.

Perhaps that’s what set me off. I found myself imagining the colours and forms that would appear over the next few weeks as the many buds opened; then how the Coastal Garden would look in a year or two. I seemed to watch the thyme spread into the pebbles and cracks, the stems becoming woody at the base, the leaves releasing aromatic oils each time they were roughed up or scuffed by the feet of passers by. 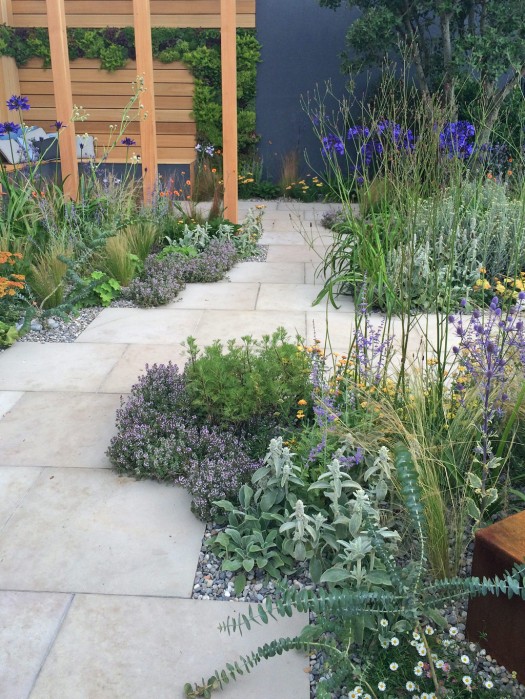 My imagination raised questions too. Would the achillea grow taller or does this cultivar remain compact? How would the strip of green wall work out – would it stay lush or start to peter out as so many I’ve seen? The eucalyptus would gradually make its presence felt as it matured, but every ‘real’ garden is a work in progress: always in flux as the gardener tends, preens, amends, admires and eradicates.

I spotted some dreaded alchemilla mollis I’d soon be waging war against. Though I know this classic cottage garden plant has many fans – the foliage is one of the very best water droplet carriers – those tiny green flowers scatter seeds all around. In consequence, I’ve already spent too much of my life on hands and knees teasing it out of cracks, so now I don’t even want to do it in my imagination! Luckily the gorgeous, artfully applied layer of pebble mulch should help suppress weeds and wanderers as well as conserving water. 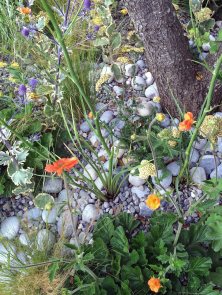 I’m not an expert on coastal gardens so have no idea whether those dark violet-blue orbs of agapanthus would be back in the second or third year – or how long they’d survive a good rocking from the kind of winds that have set my hair whirling during recent visits to the English seaside. And I seemed to feel the torment in the soul of any flower arranger lucky enough to grow them: whether to snip a few blooms off and make something wonderful with them or leave them in place to fade on those stately stems. I know what my father would have said!

The Tatton Park Flower Show has built up a reputation for offering practical inspiration for everyday gardeners. Many English homes have almost-identical garden plots, joined side by side with those of their neighbours, separated only by a low wall, shrubs or a fence. We can hardly help noticing how our plant choices, finishing touches and a few well chosen accessories can transform an identikit space into our personal haven (or hard standing for our wheelie bins and cars, as the RHS often laments). It’s good to see these talented young gardeners showing us how it’s done in the show grounds.

If you’re intrigued to see more of the three gardens, you’ll find them here on the RHS website.

I’m linking to Jude’s August challenge. This month she’s inviting us to share photos from a flower show or a garden open for charity.