I was recently asked what my plans were for the blog in 2017. One wish sprang to mind. I’d like a TARDIS (for people who are not sci-fi fans, that would be a working version of Doctor Who’s time travelling machine). Pretty please!

I’d find it handy for no end of reasons. It would mean I can travel, take pictures, select and edit them, write posts AND publish them seasonally while the plants are still in bloom. I could visit any garden at its absolute peak at the golden hour and be back in time for tea with my sweetheart… (sigh).

A few weeks ago, I selected out these blue poppy pictures and was pretty much ready to go with a post, but after loading them to WordPress, I had a wobble. Not an unusual wobble, I might say. The old, nagging doubt emerged: “Who posts about blue poppies in December when they live in England?”. Blogging about gardening is supposed to be seasonal.

I’d be a social outcast. What do you mean – nothing new about that then?

I haven’t the heart to write posts a year ahead like a gardening magazine would, because the blog is mostly intended to be fun. My impulsive responses to the inspiration and hard work of others – creative, caring people who make or tend beautiful things for our pleasure.

Once my posts are ready, I want to share them. I might convince myself to schedule a post a few days in advance (to avoid posting Wordless Wednesday posts at the weekend, perhaps) but otherwise this space is instant gratification. And, like all amateur photographers, I hope by next year I’ll be able to take better pictures of blue poppies. Ones where their heads aren’t drooping.

Only teasing about that. Most blue poppies I meet are demure to the point of appearing downcast or even furtive. It’s part of their unique style and I love them for it. 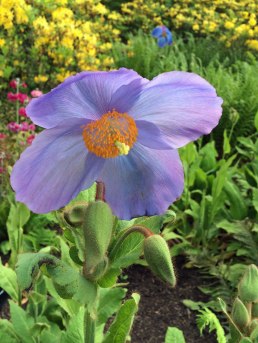 After all, their  colour is on the startling side. They don’t need to look us in the eye to attract our attention or increase our devotion. There are societies dedicated to Meconopsis, which is their official name – I’ll provide a link to the British group below.

Identification isn’t easy, even for experts, so I’m not attempting it here. These are variable plants so named cultivars are sometimes identified by little more than guesswork. If you’re looking for a particular cultivar, read the small print before purchasing – suppliers may be offering seed strains or types rather than genetically identical material, propagated by division.

But if you were to ask me if I’ve ever seen a blue poppy I did not like the look of, I’d have to say, not that I remember. Any blue poppy I see, no matter how isolated from its peers, is guaranteed a squeal of delight. So you can understand my state of excitement to find myself in front of a whole swathe of them… 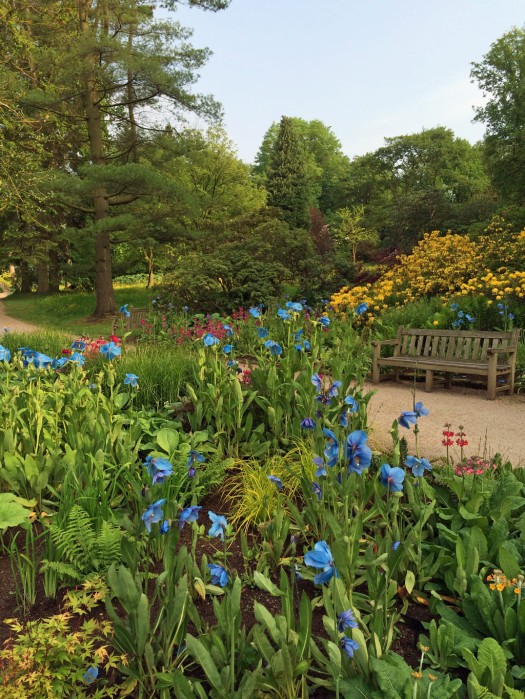 …with a garden bench conveniently placed for contemplation. I even smile at any giant fabric ones I happen upon.

Gardens without blue flowers lack something for me, but the blue of a cornflower and the blue of a poppy is not quite the same thing. Many meconopsis have that particular, almost unnatural electric, sky blue character that makes them jaw dropping on first sight. It’s far from unique among flowers: you’ll find the colour in some forms of corydalis, gentian, hydrangeas and delphiniums, but if you see it on a rose, a peony or a dahlia, it’s a fake.

Most of these pictures were taken at RHS Harlow Carr Garden around the time of their first Flower Show in early June 2016. Companion plants that stood out were Anthriscus sylvestris ‘Ravenswing’: a dark stemmed cow parsley with purple-black foliage holding aloft clouds of white flowers; a choice assortment of primulas; and Tiarella cordifolia ‘Spring Symphony’: a foam flower grown for its masses of blooms rather than the foliage.

The flowers of ‘Spring Symphony’ have pink buds at the tips that open to starry white flowers. A  comparison usually presents itself, but they were too short to be pokers, and lacked the heads to be ballerinas, so I’m struggling. Does Father Christmas have any lady elves that like to disguise themselves as flowers during early summer?

But what am I thinking of? Almost all the companions stood out, including blue corydalis that echoed the poppies so well, pink corydalis formosa, russet coloured ferns, epimediums, hostas, gunnera and variegated brunnera.

The candelabra primulas stood out so well that I’ve cropped them out of some of these pictures so we can focus on the poppies, but here are a just few:

But back to the TARDIS. I’d like a blue poppy coloured one.  You might think that’s just me being impulsive again, but I’m a rational thinker. You could park an electric blue TARDIS anywhere in the 21st Century and people will think it’s a marketing ploy and ignore it. If I stick with the usual dark blue colour, there could be no end of mix ups with the security services and intergalactic villains, which is hardly going to help me get the posts done in a more timely fashion.

For those whose curiosity about blue poppies has been piqued, there’s more pictures here and a few facts below.

While meconopsis are in the poppy family, the true poppies are the papavers. One way to tell these close relatives apart is to look at the seed-producing parts of the flower. Papavers have the familiar, rounded seed pods often used in dried flower arrangements. Look closely and you’ll notice that fluted caps form a roof above a ring of holes around the top of the pod. When dry they make natural seed shakers. In contrast, the styles and later the seed pods of meconopsis are slender as seen in the top picture.

The website of The Meconopsis Group is a treasure trove of information about all kinds of meconopsis, not just blue ones. Find out more here.

For my take on the first Harlow Carr Flower Show, contact information for the garden and to see the spring foliage of blue poppies check out my earlier post or visit the RHS website.