The most widely grown hardy (or heritage) mum is Chrysanthemum x rubellum ‘Clara Curtis’. It was discovered by Amos Perry in 1929 at Happy Valley Gardens in Llandudno, Wales, where my sister and I often played as children. (Not in 1929, I should add.)

Despite its roots, I see Chrysanthemum ‘Clara Curtis’ far more often in Mississippi than I do here in the UK. It’s a very distinctive variety with luminous pale pink flowers with a touch of lilac. A lax, sprawling plant, its abundant blooms lean over each other in a pile like a heap of puppies watching TV. (Pale pink, daisy-like puppies with yellow noses… OK, you’ve got me – I was trying to see how wild a comparison you’d let me get away with, but that was a step too far, wasn’t it?)

C. ‘Clara Curtis’ merits a post of her own, but today I’m showing some of her sisters – other Chrysanthemum x rubellum hybrids that ought to be as widely grown.

For years my sweetheart has been collecting and trialling hardy mums in his own unique way: leaving them in pots to fend for themselves for many months, boarding them out with friends, giving some away and planting favoured ones in his garden. Every step seems designed to challenge plants to die or, as he would put it, to identify the hardy mums that somehow hang on with no care at all.

Many plants do succumb, especially as many of the starts are mere scraps, begged from other gardeners. Some of the fancier ones, such as a sweet pink with spoon-shaped petals and the button style bronze, quickly vanished without trace, despite being accorded a suitable spot in the garden.

Other Chrysanthemum x rubellum hybrids survive winter after winter: a couple of pinks, an apricot-yellow and this bronzy-orange. 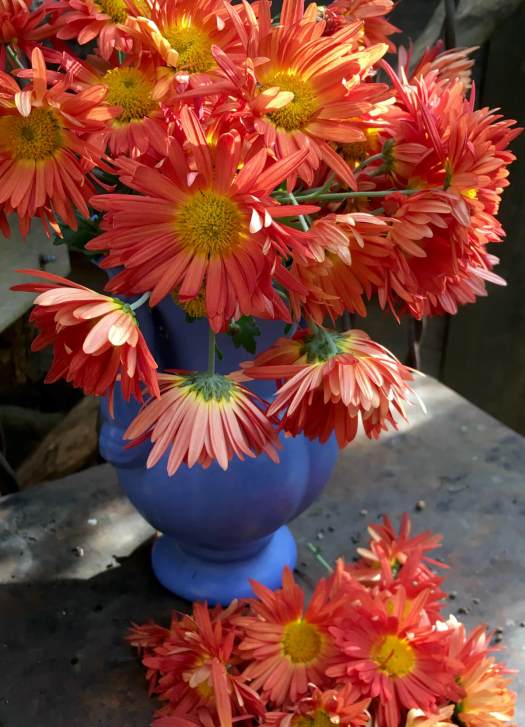 I’m not sure whether the ones pictured here are passalong seedlings or named cultivars. An online search didn’t much help, producing many more names than pictures. The second most commonly mentioned variety is C. ‘Sheffield’, a soft, pinky apricot which I don’t think I’ve seen. At some stage the botanical name has been changed from Dendranthema zawadskii latilobum.

Most rubellas are singles, but they hybridise readily and I have seen a few doubles.

My favourite apricot-yellow was labelled ‘Judy’s Yellow’ when we got it, and looks like a paler form of ‘Mary Stoker’. 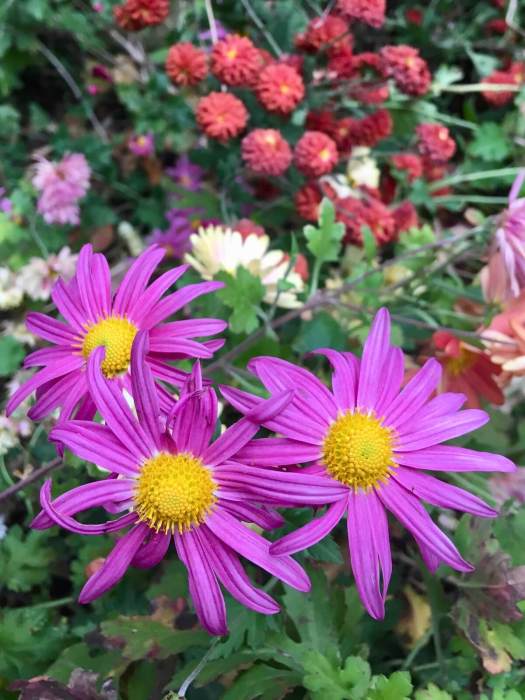 While their form is less dense and perky than the chrysanthemums that are often displayed in flower for a few weeks around Halloween then are thrown away, it’s nice to know that these will be back next year and, if allowed, will spread.

My sweetheart is the real enthusiast, so should be the one to write about them. I am merely sharing a few pictures as a teaser to see if they prompt him into action. 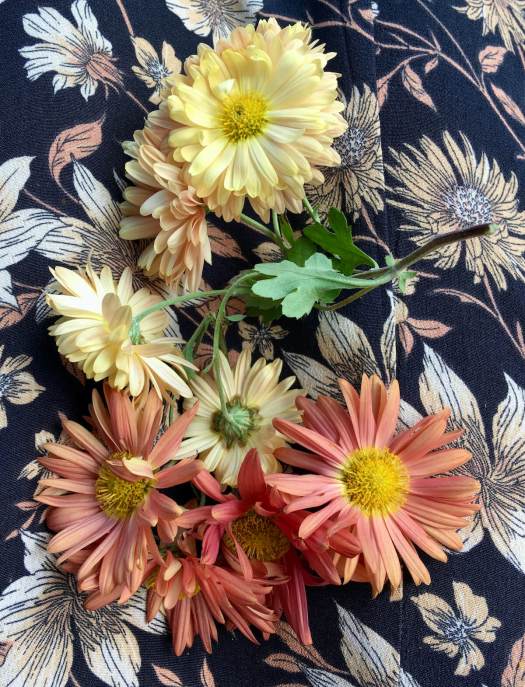