Fritillaria imperialis are very attractive in flower, although they are decidedly pongy when grown in a big group. Folk names for them include Crown imperial and imperial fritillary.

Walking around a woodland garden last spring, my nose picked up something foxy in the air. I thought I knew what it was, but not where it was coming from. By following my nose, I eventually tracked down this clump of flowering bulbs, a bit deeper in the woodland. 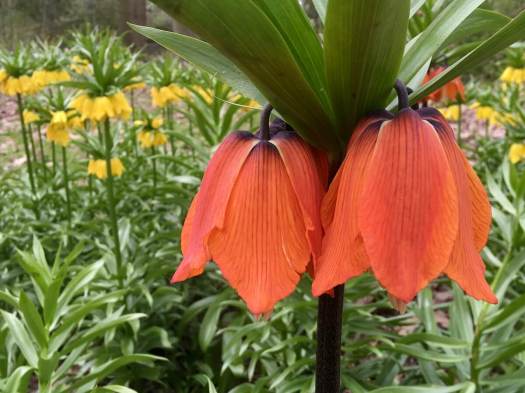 Fritillaria imperialis is a stately plant. Bell shaped flowers dangle in clusters at the top of a sturdy stem, the crown of flowers itself crested with a mop of leafy bracts. I can understand why the golden yellow ones would prompt the comparison with a crown, although their tousled character gives them a sheepish look: the llamas of the plant world, perhaps.

I loved the distinctive brown markings on these orange plants. Sadly none of these were labelled so any identification would be a guess.

I found a supplier describing them as having ‘a distinctive musk-like odor’, and suggesting they are combined with fragrant daffodils.

All I’ll say is, good luck masking that scent!

This site uses Akismet to reduce spam. Learn how your comment data is processed.