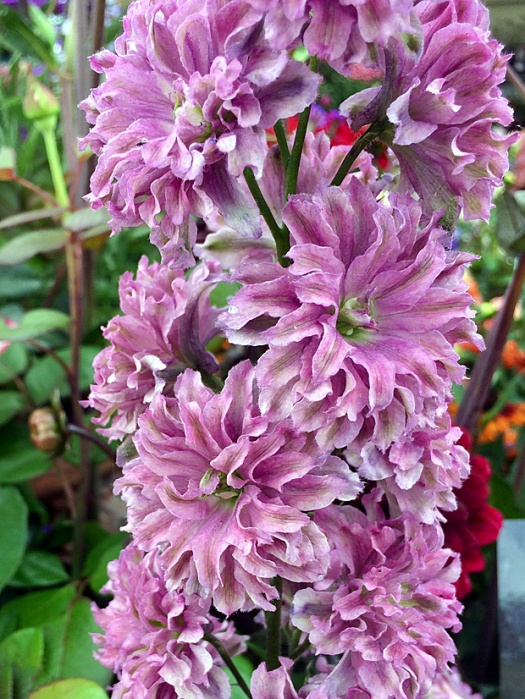 During the summer, I dedicate more time to taking photos than to sharing them. If you’re a flower stalker too, you’ll understand the temptation. After all, a delphinium waits for no man (or woman), blooming in response to triggers we understand at an abstract level rather than feel happening at a cellular one. It’s somewhere between a pleasure and a frenzy to be in full-on photo gathering mode, so, as September taps on the door, it feels good to slow down and enjoy revisiting summer’s photo stash.

This plant wasn’t labelled at RHS Tatton Park, where I saw it, so I’ve had to look it up. Delphinium ‘Flamenco’ is part of the Highlander series of Scottish-bred delphiniums. The ruffled flowers attracted me, with their tiers of pink petals, each with a hint of lavender or green, clustered around a pretty green eye. It’s a shorter growing variety, so worth considering for a smaller garden or towards the front of a border. It was being grown as eye candy in a large pot near to a splendid greenhouse where it would be sure to draw in visitors like me, who had flowers at the front of their minds rather than structures.

Hope you like this one as much as I did! I’m sharing it as part of Cee’s Flower Of The Day.

20 Replies to “Delphinium ‘Flamenco’ from the Highlander Series”