Placed like an invocation in a winter vegetable garden is a penguin with a story to tell. On last month’s visit, this part of Ness Botanic Garden was looking (I won’t say sorry for itself, as it was well-tended) out of season. It wasn’t going to feed a family of four any time soon, though nature being what it is, I’m sure magic was taking place under the soil.

For plenty, we had to look to the surrealist style painting of fruit, roots, leaves and tubers that covered the surface of the bird. I spotted onions, cauliflowers, garlic, parsnips, garden peas, carrots, sweet and hot peppers, grapes, lemon, marrow, fennel, cabbage, broccoli, aubergine, lettuce, gourds and an assortment of mushrooms, but that’s not all, by any means. I’m glad nobody needs to find shoes to fit our penguin’s sweetcorn and celery stick feet.

I love the artichoke throat. A pea eyebrow gives him the kind of look it’s hard to put your finger on, as if he was fine with most of the ornamentation, but that pea was a step too far. I could imagine spending ages as a child tracing out the patterns – it’s not that far away from some of the kitchen wallpapers around back then.

Noting some signs of age, I checked out his history and discovered he was part of a city-wide art initiative almost a decade ago, Go Penguin, a fun way to draw attention to the serious issue of climate change. Tens of thousands of Liverpool schoolchildren took part, thinking about the issues and proposing designs.

Articles I’ve read variously list colony numbers as being from 130 to over 230. What’s not disputed is that each penguin had a different design dreamed up by artists, children and celebrities.

The wider community was encouraged to walk the art trail, penguin spotting. Iconic locations such as Albert Dock, The Cavern, Bluecoat Chambers, The Anglican Cathedral and the Liver Birds each hosted one then, after the event, some penguins were auctioned off for charity. I wonder what kind of forever homes they all have now? 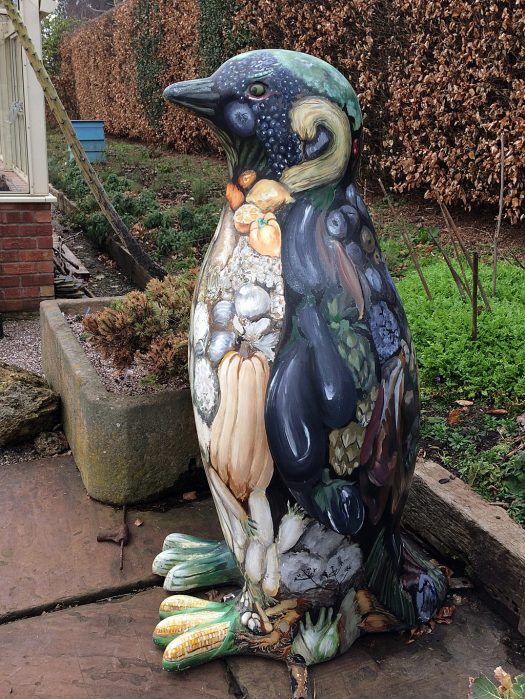 Our penguin has a number and a name (a slightly misleading one):
135 – Grow Your Own Penguin

Artist: Olivia du Monceau – if you google her, you’ll be able to flick through her impressive cv. The penguin does not appear to be listed (obviously a red herring).
Sponsor: Ness Botanic Garden and Wirral Council
Current location: Botanic Gardens, Neston, Wirral

For pictures of more individuals in the colony, check out this Liverpool Echo publication.

31 Replies to “Ness Botanic Garden Penguin: Grow Your Own”