Some of the most picturesque American roses (to my British eyes, at least) have been encouraged to clamber over fences. That’s how Rosa ‘Red Cascade’ managed to sneak its way into my heart. If ever a rose was destined to make a plain fence seem more interesting, this is it. The first time I noticed it growing was in tough conditions, in full sun, on a mesh fence, in a graveyard in Jackson, Mississippi. If it had been flowering at all, I’d have been impressed, but this plant was liberally covered with red blooms.

While ‘Red Cascade’ is often sold as a miniature climber, ‘miniature’ describes the flowers more accurately than the habit of the plant. The Antique Rose Emporium has trained one to grow up a 15ft (4.5m) pillar.

It doesn’t naturally climb. More of a scrambler than a rambler, Red Cascade will form attractive and surprisingly uniform ground cover if the plant is not persuaded, from its earliest days, to cover a pillar, trellis or fence. Longish stems sprawl or arch away from the centre of the plant, which looks (to quote my sweetheart, who loves this rose) “like an upside-down octopus”. As the shoots don’t grow straight upwards, to get it to climb, you have to gather them up and tie them against their support. Since the stems are thorny, this is no mean feat.

The foliage is rambler-style with pretty, elongated leaves and twiggy older growth. The roses are a true red and keep their colour as they age. Each rose may only be an inch or so (3cm) across, but what the flowers lack in stature they make up for in bounty. A thriving ‘Red Cascade’ rose produces several hundreds of flowers during its long flowering season. The blooms are fully double, with their petals arranged in an informal ruffle rather than a neat rosette. 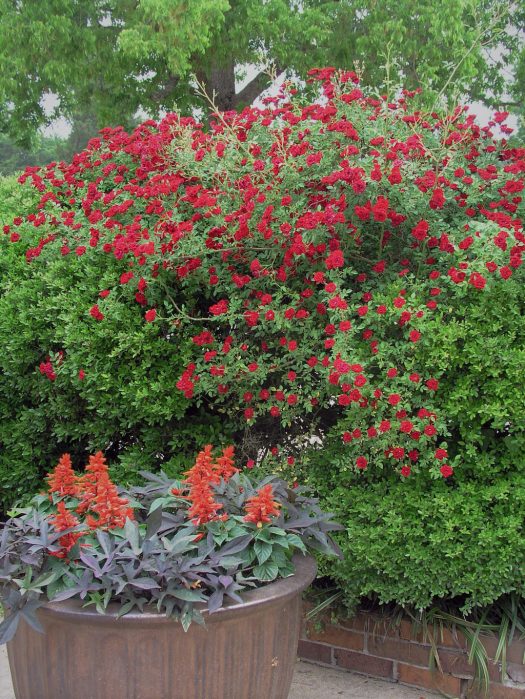 Many repeat-flowering roses take some time to recuperate after their first flush of flowers and benefit from summer pruning to produce another good flush later in the season. For me, an ever-blooming rose is fake news – a breeder’s marketing term – but Rosa ‘Red Cascade’ is about the closest you can come to it, given a situation that pleases it

And, as roses go, it doesn’t ask for much. New plants need to be watered and fed until they are completely established, but can survive very poor conditions and complete neglect after that, as many a deserted homestead or graveyard will testify. And by ‘survive’, I don’t mean ‘just about cling on to life’ as so many neglected roses do. The foliage will stay healthy and blackspot free, though anyone who habitually carries a pair of pruning shears might find a few twiggy pieces to prune out.

A true passalong plant, ‘Red Cascade’ roots readily, so makes a great starting point for someone who wants to try their hand at propagating roses. After all, if you end up with too many red roses, and they’re as versatile as this one, you’ll not have too much trouble finding homes for the spares!

Rosa ‘Red Cascade’ was bred by Ralph Moore, the father of miniature roses, in or before 1976. I haven’t seen it grown or offered for sale in England.