Early autumn is a great time to hunt for fungi, so I have spent some time searching for the most atmospheric of all, red and white spotted toadstools, in all the likely and less likely places I could think of near where I live. As often happens, when I was not searching, I glanced up and had the thrill of seeing twenty or thirty of them growing on a hillside in a narrow strip of mixed, light woodland on the edge of peaty moorland.

Toadstools are the fruiting bodies of underground mycelial networks. Happy to return to earth, they emerge only briefly after a rain, swelling rapidly to full size then rotting back after releasing spores from white gills on the undersides of their caps.

My happy discoveries were forming an uneven, broad, very gappy ‘circle’ that encompassed two birch trees. Romantics say that mushrooms and toadstools appear in rings where fairies have been dancing hand-in-hand. Darwen’s fairies are very sure-footed if so, as the incline is ill-suited for dancing. I suppose that’s what wings are for.

Science tells us that rings form because the fungi deplete the soil of the elements they need to thrive. By dying out in the middle and producing toadstools at their outermost edges, future generations can gradually spread in wider and wider circles over new soil.

At first sight, there seemed to be at least three types of red ones: plate-sized toadstools with flattish caps on 12-15 cm / 5-6 in stems, with and without spots, and short ones with dome-shaped caps. A distinctive fragrance hung over them.

It is notoriously tricky to identify fungi and mistakes can kill. Individual specimens vary and change colours and shapes as they mature. Having checked and double-checked, all three ‘types’ were different stages of the same toadstool which has the folk name fly agaric and the scientific name Amanita muscaria.

Over the next few days, I watched the caps of the smallest ones expand, their stems lengthening so their ragged skirts could be seen.

A fly agaric’s spots are not flat, as you might imagine if you’ve only seen them at a distance or in illustrations, but are raised, irregular remnants of the universal veil that protects the developing toadstool and so can wash off, given enough rain.

At this time of year the mosses, wimberries and ferns are littered with fallen leaves, dried up grasses and twigs. Many of the fly agarics had emerged carrying some kind of topping from the woodland floor. Others had caught debris as the caps thickened and were turned into a shallow dish shape by the developing gills.

Although fly agaric toadstools are classified as common, common is relative. Mixed woodlands with birch trees are a good place to look. I’ve very rarely seen them and certainly never such a fine group as this. 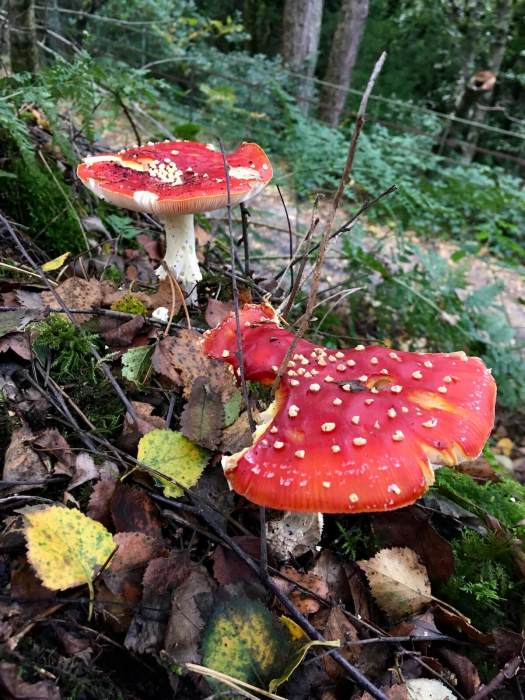 I enjoyed seeing their pull on passers-by who noticed them and marvelled how others strode by without seeming to notice. 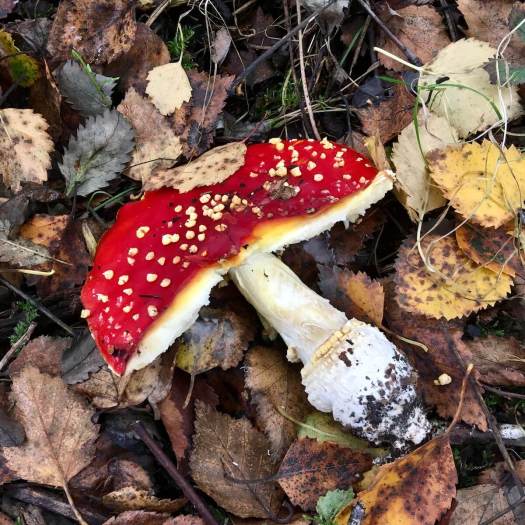 The uprooted one shown in my last picture reminded me most of illustrations in children’s books.

Mysterious, strange and most certainly to be respected, fly agaric toadstools are poisonous and hallucinogenic. Sacred in some cultures, they are prepared for rituals in others. Need I say I did not pick any?

This site uses Akismet to reduce spam. Learn how your comment data is processed.