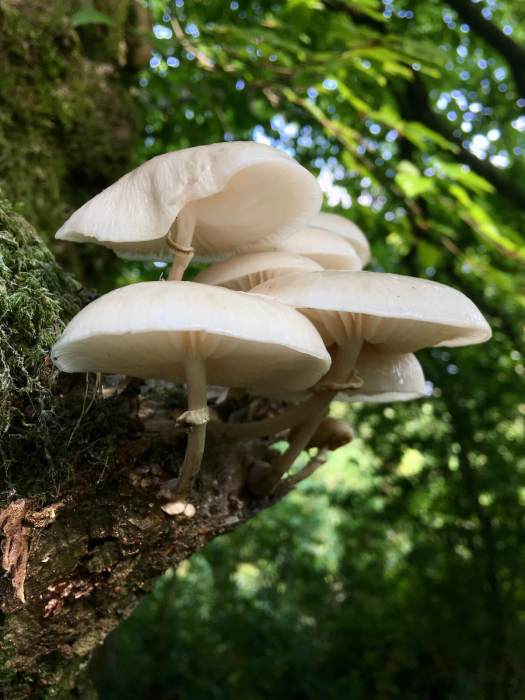 My sister and I were on a mushroom-spotting walk in and around Sunnyhurst Wood when we found these pale ones just above head height on an old beech tree. The tree has been struck by lightning and part of its canopy is dead and bare.

We weren’t planning to pick mushrooms, neither of us being able to identify them, just to see how many different types we could spot before the autumn leaves covered them. We found quite a lot, though no unusual colours, such as purples, and none of the elusive white spotted red ones I’d love to see. Most of the fungi were growing at the base of trees, on the ground or on fallen branches, and the ones in the trees were more often bracket or turkey-tail types so these seemed unusual, the luminous backlight showing them off well against the living half of the tree. 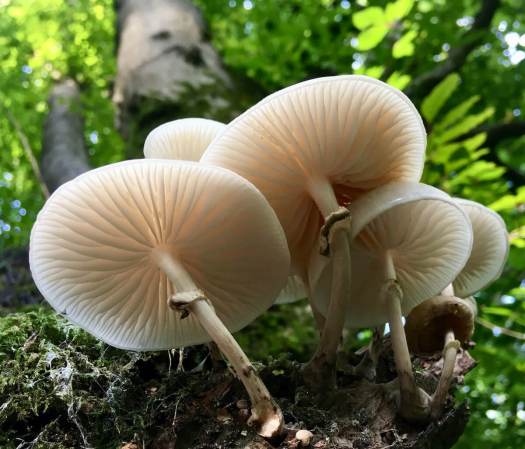 Here’s a view looking up at their equally pale gills. The biggest ones were the size of my cupped hand.

I went past again yesterday which was ten days later but found only a couple of thin, shrivelled stalks to show where the mushrooms had been. It took me two goes round all the trees in the area to spot them. I’d like to have seen these pale beauties again.

Outside the wood, the hedgerows are bountiful now with haws, seeds, rose hips, and trusses of wild blackberries. The sight of them made me think how the old hunter-gatherers would have been rejoicing and squirrelling away some of their finds for later in the year. Drying the mushrooms, for example. They’d have understood their uses so much better than we do now.

I carried on up towards the tower which is wrapped in plastic (a story for another time), stopping on my favourite part of the moor to sit sideways on a plank-style bench and watch the swallows swooping high and low fast over the heather around me. I tried – and failed – to count them, but would estimate up to a hundred swallows were hunting together, making busy calls and sharp chirps as their paths interlaced over the hillside.

A hundred pale-bodied swallows make for a theatrical show. Often one would fly straight at me, passing over my head, or two would fly up high together, twist a knot in the air, and veer apart. Mostly they skimmed and skipped busily over the tussocky moorland, picking insects out of the air.

I hadn’t been at all sure that I wanted to venture so far up the hill, but the pleasure of seeing so many birds was ample reward for pressing on. Soon the swallows will have left NW England on their six weeks’ journey to the south of Africa, crossing Spain, the Sahara and the Congo rainforest. Perhaps I witnessed them gathering in prelude to that.

My iPhone was not up to capturing swallows changing trajectories at 35 mph, so you’ll have to imagine those. Instead, I’ll leave you with a picture of my companion (briefly) on the bench.

32 Replies to “Pale Mushrooms and a Richness of Swallows”