Scampston Hall Gardens was designed by Piet Oudolf as a series of rooms, each in his characteristic style. The perennial meadow is a playground for pollinators, featuring Rudbeckia, Achillea, Phlomis, Verbascum, Helenium, Monarda and Geranium.

One of the ideas behind the idea of a perennial meadow is that the design is more likely to remain stable and balanced as many of the plants will come back year after year, unlike a planting of annuals reliant on the vagaries of seed.

The garden features at Scampston Hall are as high quality and desirable as the planting, if – and it’s a big if – you have the room and budget for them.

Looking back after a year of lockdown, it was a joyful day, but at the time the unrelentingly bright sunlight seemed rather a torture, making it difficult to get a decent picture despite the wealth of plant material.

While we were resting our feet some distance away from the perennial meadow having a drink before setting off for home, a small cloud appeared, heading for the sun. I raced back and just managed to get one picture in duller, more amenable light. Then the cloud drifted on its merry way and the garden was back to its blazing glory. 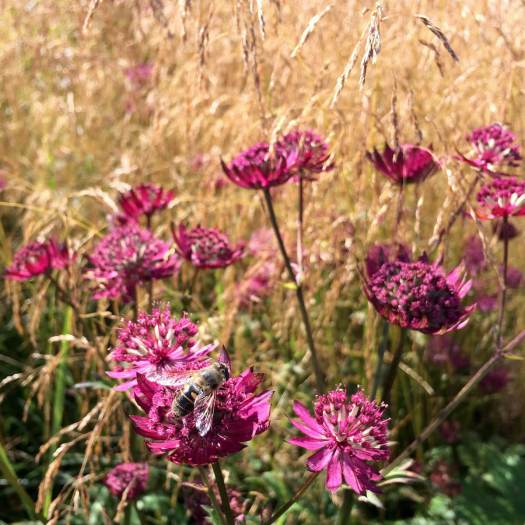 I would probably not have shared these were the topic of Becky’s April Squares not Bright. As it is, they seemed a suitable choice.

36 Replies to “Scampston Hall Gardens On A Sunny Day”