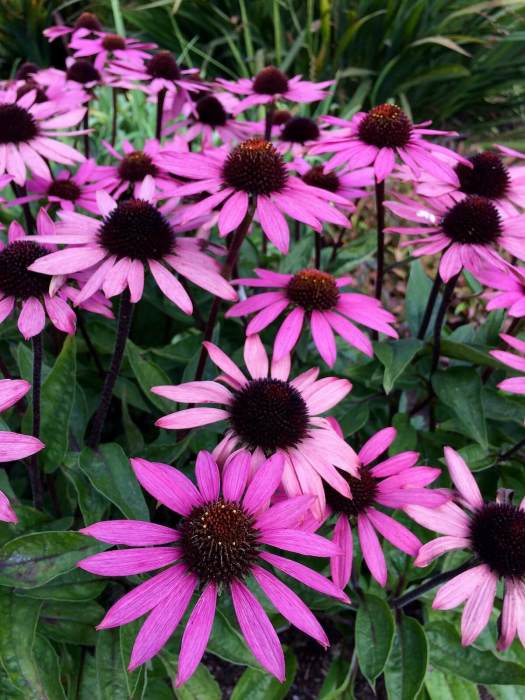 Before I post a flower (almost always) I google it. Then (almost always) I take a minute or so to marvel at the different flower pictures that have appeared in my image search results, listed under the same name. Unusually, I found nothing when searching for the name on the plant label, so I’m not sure if it it was a cultivar name, Echinacea ‘Dark Stems’, or purely descriptive – an unknown pink coneflower with dark stems.

As echinaceas are introduced in large numbers and not all are truly perennial here, it might be one that vanished without trace. Or it might be one for the future, being considered for release under the Blooms of Bressingham name, as that’s where I saw it.

You’ll note my readiness to speculate, which reminds me to tell you that my sweetheart point blank refuses to speculate. When invited to, he immediately starts saying ‘I don’t know… I don’t know’. The very rare time he does speculate, I see why he doesn’t do it. He does not feel bound to stay within the outer limits of possibility that the rest of us routinely apply. So if I were to ask him to speculate what Mother might give us for tea, he might, when pushed, suggest walrus with painted tusks and golden gravy on a bed of daisies.

I’ve never known anyone who wouldn’t happily hazard a guess on at least some subjects, other than one other. An outtake regularly shown on British TV featured an elderly man stopped in the street by a reporter and asked for his views on a political issue.

This was back in the vox pop days when it seemed like an everyday person’s views on important issues might matter; back when a Blue Peter presenter slipping in elephant dung was the highlight of every compilation. I’d speculate it was the late 1970s or early 80s, although my sweetheart obviously wouldn’t.

I would love to be able to send that clip to my sweetheart next time he comes up with one of his whacky speculations, so if anyone knows where to find it, please send me a pointer. Bear in mind that the man might turn out not to have been very elderly as I was young myself back then.

Shared for Cee’s Flower of the Day

39 Replies to “Echinacea With Dark Stems (And A Request)”