At Chimneyville Arts Festival in Jackson last year, one stand was a Shakespearean comedy, full of colour, reverie, laughter and life. Was it just in my imagination that Falstaff, Feste, Caliban and The Man In The Moon cavorted with felt acrobats, goofy-looking puppets, elves, Pod people, birds, bees and bugs?

A lady dressed in a bright jacket sat quietly by the stand, rising to greet visitors with a Duchenne smile. This was Debie Deaton, a member of the Craftsmen’s Guild of Mississippi. While she was engaged, I loitered, entranced by the expressive green, blue and brown eyes of her characters, noting how they shared their creator’s good humour.

What Nature insisted was mute, Art had given its own kind of eloquence: the booth was alive with backstories. Witty ones. There was an egg-ecutive chef holding a recipe book; a crow that wants to be a raven; shoe characters climbing the walls; grey and balding goldfish; and large-nosed bugs with appealing expressions.

3D picture of the man in the moon

I asked if I could take some pictures and was made welcome. A comedy-style interview ensued (I was determined not to get in the way of other visitors to the stand) where one question might be followed up by another a hour or more later. Luckily Debie seemed unfazed by this treatment, though I fear I may have had me down as weird, had I been her.

First, I made the blindingly obvious observation that her figures were very artistic and had a distinctive style.

“Just because something is funny, that doesn’t make it less valid,” Debie told me. “Comedy is undervalued as art – comic films can be just as artistic as the serious ones.”

“Life is serious enough,” she continued. “I want people to see my artwork when they get home and smile.” 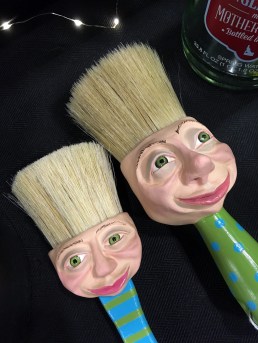 “The Paint Brushes sort of evolved… they have such great hair!”

They will. All her creations are individual characters, even the ones that look like they could be brothers or sisters. Debie’s affection for them gives them an extra quality. I instantly liked them – not just one or another, but the whole gang.

I don’t know if I told her how Shakespearean her work seemed. Seeing Falstaff and Caliban was just my fancy, but it was not a wild fantasy. The humanity that winks at and values Sir John Falstaff was there, for sure.

Yet Debie doesn’t take herself too seriously, wearing her talent lightly. As she speaks, you get a feel for her creative process.

She talks about her characters having sweet and savory aspects and explains how they are formed organically, her sense of them evolving as she works. “Once I get the eyes in, that generally gives me a good guide on the direction.”

She gathers a skein of inspiration from people, nature, poetry, and sayings. A series of framed, three dimensional Man In The Moon pictures tap into childhood stories: our deep-rooted love of having someone watch over us while we sleep. Anthropomorphic lamps with face bases have similar roots. “We have the expression ‘smiles that light up a room’. The way my mind works,” she says, “I had to give it a try. While it’s not actually her smile that lights up, she does light up a room!” 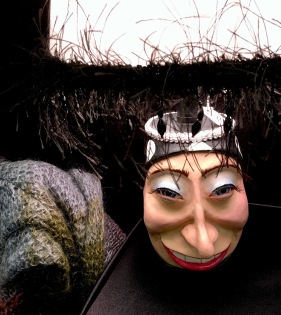 A smile that could light up a room

A Man in The Moon benevolently watches

Her characters may be complex but they are benevolent – generally. Still, she’s prepared to meet some resistance as they are formed from fibre, polymer, paper, clay and paint. “Usually when I’m working on a piece of art with a plan in mind it doesn’t turn out anything like I was planning so I’ve come to think it has a mind of its own. The piece argues with me about what it wants to be.”

The odd one resists more stubbornly than most.

Finally the lady has the costume to suit her character

“This lady, [top left] for example. I couldn’t get her hair right, I was not sure what hat to put on her, and all the time she’s looking at me as if to say ’What’s the matter with you?’”

Her own favourites include a married couple dressed for the beach. She showed me a picture of them on Instagram, giggling as she pointed out that both wear wedding rings and he has underarm hair. “I’m more interested in making art than in promotion,” she confessed, “but I do post on Instagram now and again.”

Climbing the walls lady with a hand puppet

Her care and attention shows, but it means her output is constrained by the amount of work each figure represents. She works slowly and it’s a challenge for her to make the number of pieces needed for a show like Chimneyville.

Meeting her made me think of the balance each artist and craftsperson treads – how to produce pieces that allow full expression of their skill and creativity, but remain fairly affordable. Nobody should expect to acquire any of her major pieces without making an investment.

I asked about one of my favourite characters, the pointing man. “That was another piece I could never be satisfied with. I re-worked him several times, going so far as to cut off the top of his head and his original nose! After fussing with him off and on for over a year he turned out to be sort of a ‘know-it-all’ politician or professor type.”

Some of her artworks are toys (finger- and glove-puppets, art dolls), others serve household functions (bud vases, bottle stoppers); all would double as fantastical ornaments. She’s inspired by the places we go to enjoy ourselves – the music hall, circus, carnival, theatre and beach – and the bright colours and simple patterns found there.

Acrobat, captured in a gravity-defying pose

She and her husband have recently been bitten by the bird-watching bug. “As more and more varieties of birds show up on my patio, I’m fascinated with how funny they act and how acrobatic they are,” she explains, “so the Nutty Birds began appearing in my work.” These multimedia birds have absorbed the influences of her Big Top characters, reflecting how, for Debie, wild birds “fit right into that feeling of flying circus performers.”

As I left the stand for the final time, I was imagining how much a child would treasure a Debie Deaton piece and how the adult mind might be torn between the joy in seeing it being used and loved, and the desire to keep it on the shelf as a work of art. 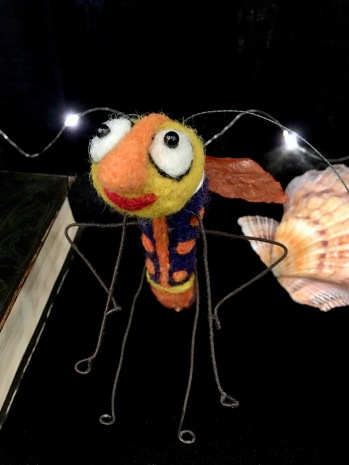 I suppose that’s a nice quandry to have.

After posting, I belatedly discovered that Leya’s theme for the week is Creativity and had to join in with this. I hope she won’t mind! 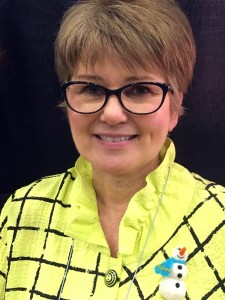