The last few days, we’ve had enough rain to kickstart the process of re-greening the North of England’s meadows, and I started to feel a little celebration of sunshine might not go amiss. Isn’t that the way it always is?

My first is a decidedly strange (for me) shot of roses growing overhead – so high, they ruled out the little dead-heading needed for a conventional shot. At the time I took it, I was half-imagining some form of caption in the top left: a concise one like Dog Days or Wine & Roses. As the end result captures more of their spirit than I expected, I’m leaving it alone. For now. 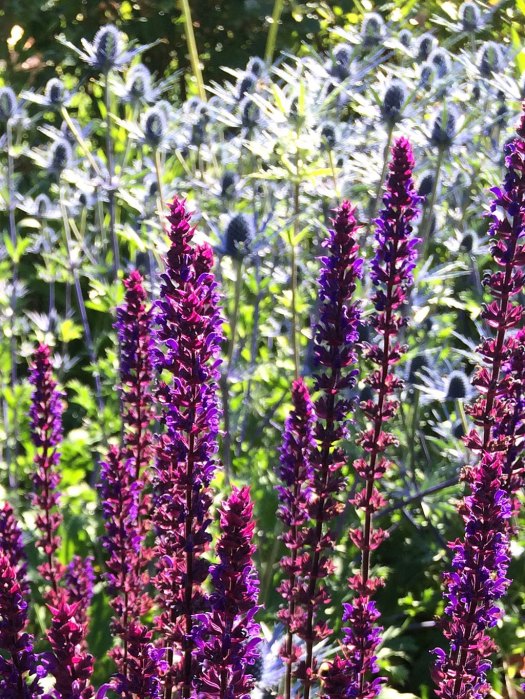 The second is pure essence of flower blur: spires seen against thistle-type flowers and a leafy lime green background .

If I was challenged to produce a flower picture that seemed to represent all the seasons in just one shot, this would be it. I wasn’t trying to be arty when I took it – nature forced my hand. One of the florets is almost in focus, but blurriness definitely wins out. As a picture of a plant, it doesn’t quite work but the rich colours are effective, the flowers seem joyful and I like the way the interplay of light and shade draws the eye around the picture.

Finally, a hooded-style yellow poppy (Meconopsis napaulensis yellow form) in a woodland garden. This is another weird shot that I can’t help liking: an illuminated manuscript of plants. The main flower was the intended subject, but the shadows on the hosta leaf, the nodding little novice poppy in the bottom right, the hosta flowers, turned blue by some trick of the light and even those pinkish blurs all demand attention.

None of these pictures did what I was intending, but they all succeeded in capturing an atmosphere I was barely aware of when the whole scene was before me.