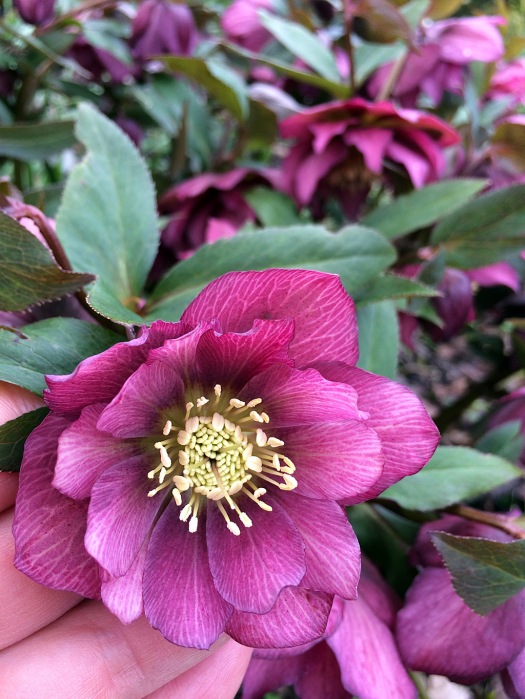 When you photograph a hellebore, you’re faced with some stark choices. Show the plant as it is and capture the natural essence of the bloom, or lift the flower to show the inside. It’s tempting to go for a macro shot like this one to reveal the beautiful pattern of veining but it gives me a weird feeling of misrepresentation; invasion, almost. It feels uncomfortably like peeking at a Victorian lady to get a glimpse of voluminous, lacy underwear.

I would have said that this shot gives a better impression of the true character of the plant if the one in the back didn’t seem to be wearing a superman cape and keeping a watchful eye on a couple of conspirators in the foreground.

It’s a Helleborus x hybridus, which means it’s one of the many thousands of modern plants that have resulted as a natural or deliberate cross between species. 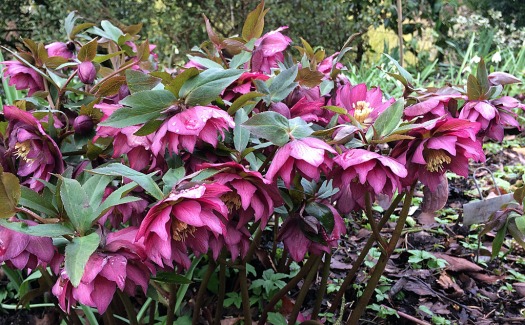 As this wide landscape shot shows, it has formed a sturdy, well-established clump full of flowers. One bloom – the one twisted upwards and balanced on the shoulders of its neighbours – seems to testify to the hand of a photographer who was here before me and also wanted to look inside. 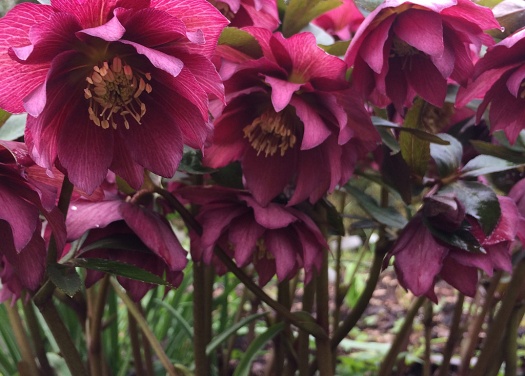 I tried a snail’s eye view too and captured this atmospheric shot of the blooms. The nodding design of the flowers protects the pollen which would otherwise be blown or washed away by harsh winter weather before pollinators could do their job.

Today’s post is inspired by Desley’s Regular Random. The brief is to spend a maximum of five minutes taking different perspectives of your subject. She allows a little flexibility – you do not need to squander the minutes all in one go. (You know I’m only teasing with the ‘squander’, Desley!)

I checked the time stamps on the pictures and discovered I spent two minutes on the clump, then returned later for the close up shots, all taken within the same minute. Five minutes can clearly be a long time when it comes to photography. 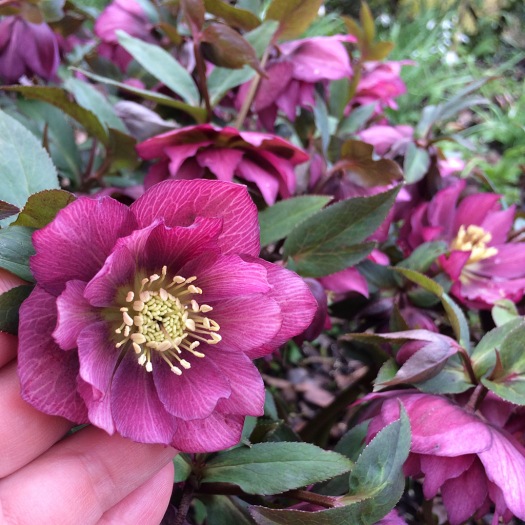 Here’s a slightly different take on the flower I started with, showing the bloom in its context. You can see the upwards facing flower in the background.

You might have noticed that the petals are slightly rounder and more wavy at the tips than the flowers in the main clump with their sharply pointed petals. Not by much, but enough to suggest this could be a slightly different Helleborus x hybridus on the edge or in the middle of the clump. If it’s a stray seedling, it’s a particularly beautiful one. 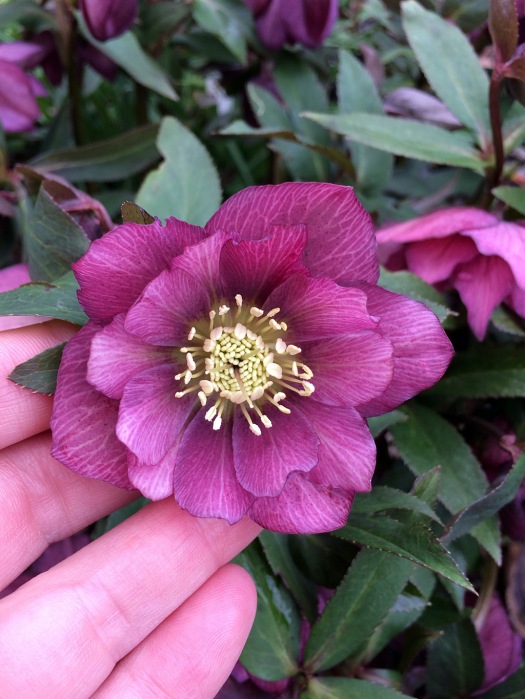 These pictures were taken at Gresgarth Hall Gardens, home of designer Arabella Lennox-Boyd.