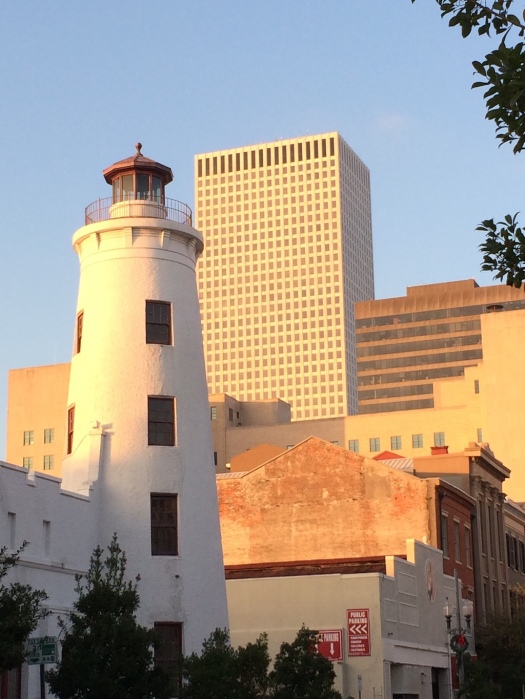 This is a slice of New Orleans street pie. Throughout the picture you’ll see order: those neat rows of windows; the rooflines; the repeated elements in that lighthouse-style tower; the stepped effect of the facades and where one part of a building meets another… need I go on?

I stopped to take the picture because I loved the way golden, evening light was harmonising the reds, terracottas and neutrals of the buildings, adding warmth and softness. Reviewing the image, my eye is drawn to many patterns which I only half-saw at the time.

Each building has been conceived by an architect’s creative, disciplined mind, giving it character and style. As each mind is working independently of the others, the whole is shaped as much by chance as by design. Look for an overall pattern and you’ll draw a blank. It’s like playing with a special kind of Rubik’s cube – one without a solution.

Would this cityscape interest me more if it was more regular, more precisely planned? Not at all. The higgledy-piggledy effect is natural to me, being from Britain, where one building may nestle against another 500 years younger.

The image reminds me that creative minds have their own logic: what one person sees as order might be incomprehensible to another.

When recruiting marketeers, I’ve always chosen people who could organise things. Order mattered a good deal to them, but their method of achieving it varied. My first instinct was to attempt to get them all to work the same way. I quickly realised that they were less happy and effective if forced to be organised in a way that was alien to them, no matter how logical it might appear to me. My method might be slightly better than theirs, or it might not: either way there was usually not much in it.

The momentum of a creative person is their life force. Halt that flow at your peril.

11 Replies to “Order and Creativity”