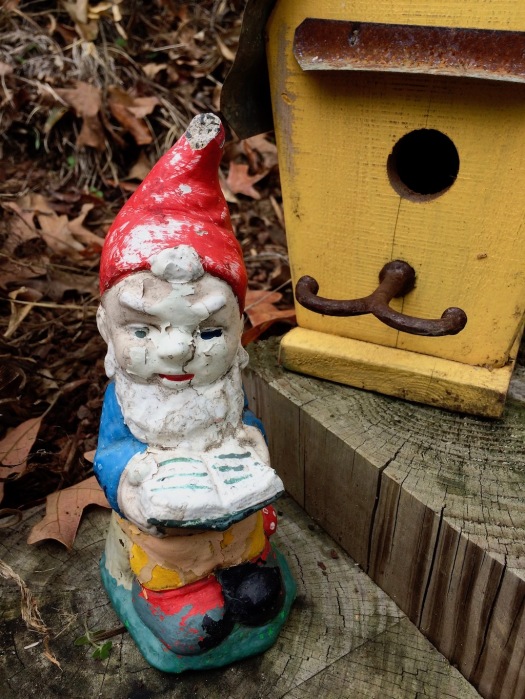 This week’s photo challenge is Repurpose. It’s difficult to know where to start with that one. My sweetheart has trashed out his house and garden – I could say ‘enhanced’, if wearing my marketing hat – in countless ways, egged on by architect friend Rick Griffin and Jim Kapernick. Jim is proprietor of Old House Depot, a 20,000 sq ft cornucopia of architectural salvage in Jackson, MS.

Together, they are the most purposeful repurposers you could imagine.

Broken concrete? That would be perfect for a path. Old wood? Old wood has more uses than I care to list. Tyres? My sweetheart’s garden boasts colourful tyre planters, tyre chairs, and even some tyre-planter-spare-bits arranged to form wall decor and a small tree. Well, you have to do something with the spare bits.

Few home improvements take place without a brief, but animated discussion between two or more of the aforesaid gentlemen. At some point you might hear a hushed “What does she think?” from one of them, generally answered by “Well, she isn’t too sure”.

But who could resist those sweet, hopeful faces being turned towards her for long? And what makes you think the next idea will be any more conventional? One minute there might be a bathtub in my sweetheart’s garden, the next it is being traded in (yes!!!) for a sink with draining board (oh), to be topped with a free-standing window frame and repurposed as a potting bench. All second or third hand – no, make that ‘characterful’. Very characterful.

I’m only teasing. I’ve gotten used to them by now, as they say in the South. Now, if I could only get them used to me!

As Krista suggested my submission includes repurposed objects and shows an object designed to challenge conventional wisdom. Tired of hearing people say they would love to grow plants, but had nowhere they could grow them, my sweetheart decided to put a garden in the back of his 1988 pickup truck to show people they can garden anywhere.

The idea gradually developed from the original sack of compost into a larger, fixed container, fronted with a nice piece of pecky cyprus from Old House Depot. Later additions included a pair of bottle tree sconces, two rows of bent-over license plates, metal guard rails in the shape of tree branches, an eagle hood ornament, a naked frog (trust me, this one was naked), a hula girl and a glow-in-the-dark Señor Misteriosa figure. Plus the plants and a few garden accessories.

You may have seen cars repurposed into planters after their driving days were over, but how many have you seen that are repurposed while still being used as someone’s regular transport? You could call it a mobile form of guerrilla gardening.

All was fine for many years. The truck garden travelled the length and breadth of the US, was a lot of fun and did a great job of helping people understand that plants are tougher than they might perhaps have imagined.

Then it was stolen. My sweetheart took the blow in his stride and assuaged any lingering thoughts by quoting the stoic philosophers (not for the first time), but I felt sorry. He’d put so much thought and care into trashing it out that it was a really nice thing – and a great conversation starter, had one been needed (Delta folks never meet a stranger, I’m told).

Several nights later an eagle-eyed neighbour spotted it a few streets away, being used nefariously. Not the best idea as it is distinctive, even without its bling, and there is a super-keen and well-organised neighbourhood watch in the area. The truck was in a sorry state, looking all of its 29 years. All the plants and treasured ‘optional extras’ had been ripped out and dumped in a ditch somewhere in an attempt to make the truck look ordinary (good luck with that!). But it was wonderful to get it back. 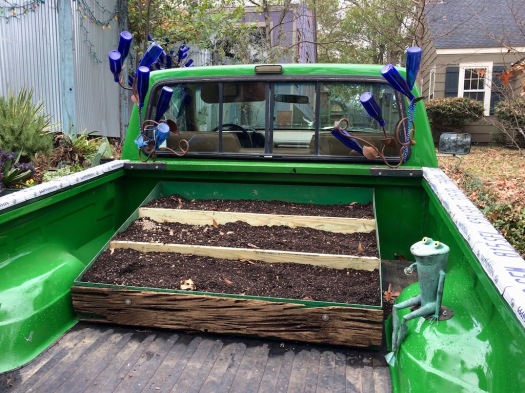 My pictures skip over the painstaking refurbishment process, (done to such an amazing standard by Hinds Community College that we are now in the unfamiliar position of being terrified of damaging the paintwork), but I can assure you, the new John Deere green gleams.

My sweetheart had his usual joy of creating the perfect soil/compost/drainage mix by digging and amending it till he could justify no more and had to reluctantly start planting. A film crew was on hand to celebrate this rebirth from the ashes.

If you’re searching for repurposed elements, I commend to you:

You’ll be pleased to hear that everything has either been replaced or offered, except the prized plastic glow-in-the-dark Señor Misteriosa figure. They’re discontinued and only the air fresheners can be found, which have been rejected as an inadequately mysterious substitute. A thorough search of New Orleans’s gift shops drew a complete blank and we can find no sign of a replacement online.

Some things really are irreplaceable, just as they should be.

39 Replies to “Weekly Photo Challenge: A Phoenix From The Ashes”