This sequence of pictures was taken during an evening walk as temperatures started to cool off after a scorcher of a day. While not technically correct – they’re dark and indistinct – their atmosphere is sweet, for me at least.

The ingredients too could be said, by some, not to amount to much: wild flowers and grasses, a few houses, an almost invisible dry stone wall with barbed wire fence, the whole topped off with a cloudy sky, the sun having gone for another day.

Not much seemed more than enough. 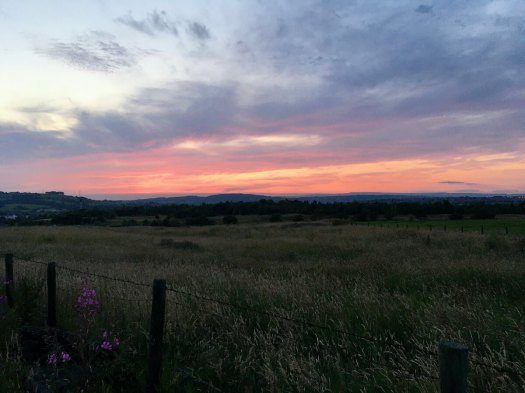 Just a few steps from here, we’d happened upon a trace of rabbits playing on the long-abandoned remains of an all-weather pitch. Their collective noun ‘trace’ was appropriate, as they melted into the brambles and long grass when we arrived, leaving just a trace in our minds of their small, bounding bodies and white tails.

It felt good to know that they too were out and about, enjoying the quiet of the evening.

24 Replies to “Amid the Wildflowers and Grasses At Dusk”