After writing my last post it occurred to me that I might have the chance to realise my long-held ambition and go to an auricula show. It was a timely thought: the N.A.P.S.’s Northern Section’s auricula show was held at Kingsway School in Cheadle on Saturday. Visitors were ‘warmly welcomed’ from 2 o’clock onwards, so I headed on down. Bargain hunters may like to note there was no admission fee and a whole table of cakes were being offered at the knockdown price of £1 per slice.

In the hall, people were peering at rows of circus plants with button shaped flowers in bright, bold colours decorated with rings, stripes, powder, and fancy edges.

It feels like we need to learn a new language to follow auricula fanciers’ talk of pip, scape, farina, tube and carrot – familiar words in the main, with less familiar applications. Before the show, I had dug out my old primula books by Mary A. Robinson for a quick reminder.

Pips are the individual flowers, compared to the flower truss on the scape or stem; farina is the white, powdery meal or paste found on some of the flowers and leaves; the tube is the hollow at the very centre of the flower; the carrot is the main root, producing smaller offsets that can be split off to form a new plant.

Plants are judged in a variety of classes. Border auriculas, doubles and alpines are, in general, not difficult to grow and will perform well for the average UK gardener outside. Show auriculas are more tricky, needing a cold greehouse, shade and a good degree of fussing and titivation to reach their full potential. Plants with farina, for example, have to be protected or the rain would soon wash off their decorative meal.

I have a sneaking respect for the collective mindset that refines the rules of competition to keep everything fair, but a rebellious outsider could describe the pages of auricula show rules as nitpicking to the nth degree. Even Mary Robinson confesses “the very small differences… may only be apparent to an experienced few.” 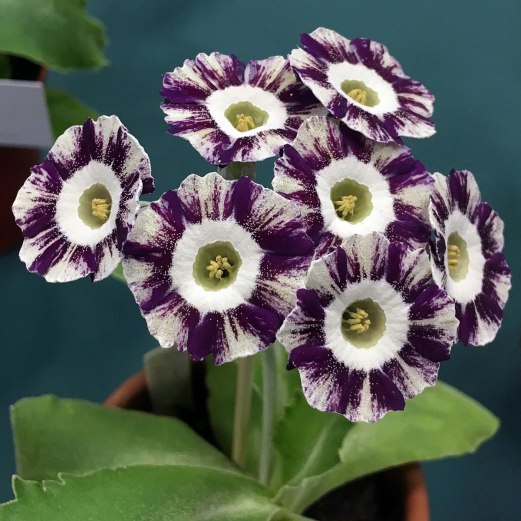 One mystery I was hoping to solve when I visited the Cheadle auricula show is what’s so bad about a pin eye, given so many primulas have one (roughly 50%)?

Plants of the same species can sometimes take one of two different forms which helps prevent self-fertilisation. Thrum eyed primulas have a circle of the male, pollen-bearing anthers visible at the top of the tube; pin eyed plants have sticky female stigmas at the top. Pin eyed auriculas are disqualified from competition. It seems harsh.

I asked Andy Kemp (who was kind enough to come up and enquire if this newcomer was enjoying the show in general and one of his plants in particular) why this should be. He explained that thrum eyed plants are easier for humans to cross, pin eyed flowers being more suited to pollination by insects. “Usually,” he says, “we throw the pin eyed ones away.”

Brutal, you might think, especially if you do not have any auriculas and would like some. Hybridising plants is a game of numbers – often very big numbers – and any serious hybridiser knows that plants that do not take a step towards at least one goal sooner or later have to be discarded.

Regular readers will not be surprised that I’m a fan of the doubles, which look for all the world like diminutive roses, their flowers packed with waved and scrolled petals. Double auriculas have to have enough petals to fully conceal the central tube to reach show standards.

Mary Robinson had a point when she observed, “The joy in growing auriculas is not confined to the plants themselves; their history contributes greatly to the fascination inspired”. There are many little pointers to their four hundred year plus heritage in the UK.

The sheer variety of colours and forms has the hand of history over it. Some like Primula auricula ‘Limelight’ seem very modern, like glow in the dark paint; others such as the browns and the doubles have an old world appeal.

Flower sizes are assessed by comparing them to florins and half a crowns. One variety is rather dismissively described as being “named after an old bicycle, as are most of [Allan Hawkes’] stripes”. Naming, as with any widely hybridised plant, can be contentious. The convention is to wait until your new seedling has won a first prize and you are invited by the judges to name it.

Exhibitors are encouraged to follow the traditional ways of dressing plants, staking their flower scape if needed; tying down or removing all but one scape of flowers; thinning the pips if the trusses are too tightly packed; and teasing out each petal so it neatly overlaps its neighbour. 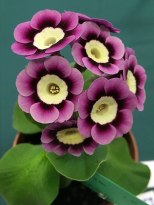 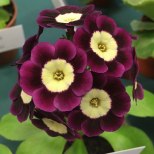 Guidelines for breeders and exhibitors advise that markings should be crisp; colours should be clear and bright and transition evenly; flowers and petals should have a rounded outline; leaves should cover the specified size of pot. Plants should remain true to nature in size, and not appear grossly overfed. It would be easy to sniff at the rules if we didn’t have proof of their far sightedness in the array of clearly differentiated colours and forms at the show.

Any gallery of plants from an auricula show will feature named varieties that are not widely available. It was a minor disappointment that one plant I have long admired, a green, yellow and orange stripe, Primula auricula ‘Lord Saye en Sele’, was not on display. At least that gives me a good excuse if anyone asks why I need to go another year!

Andy Kemp explained that the stripes went out of fashion a few decades ago so many of the older varieties are either lost or in very short supply. He and a few other hybridisers are doing their best to reverse the trend. He was showing a first prize winning plant, Primula auricula ‘Drws y Gwynt’, (pictured in the stripes section above) that he had bred which was frustratingly slow to produce offsets. There were, he believed, only four plants in the world.

Primula auricula ‘Prague’ with its certificates

That’s part of the fascination. Owning a little living masterpiece of colour and form that could fade away or be eaten without your vigilance. Taking care not to allow water to spoil the leaves or flowers. Finding out how to grow a plant true to type so it is judged worthy of a top award from your peers, such as Chris Gill’s Primula auricula ‘Prague’ (above right).

Plant societies may not be for everyone, but those who do enjoy socialising in the ‘real’ world with keen plantspeople might think about growing a few auriculas then investing the £10 or so needed to join one of the societies and participate in their seed exchange scheme. There are Northern, Southern, and Midland and West sections of NAPS which, weirdly, are not technically the same society. Certainly the southern society website has no mention of the others. You’d think this is a quirk of history and that keen growers will move freely amongst them, but I could be wrong. The wars of the roses may have nothing on the wars of the auriculas!