While I was in Mississippi, we were passing Suzie Cranston’s house when a ball of energy with a beaming smile bounced out of the driveway, exclaiming “I’m painting them! You must look! And I’m really enjoying it!”

She’s the lady, some of you may recall, with perhaps a hundred birdhouses in her garden.

Waving us down the path to her workshop, she pointed out the detailing of the ones she was working on. Any bare wood had been painted over with cheerful colours. Polka dots had been applied and contrasting colours had been used to pick out their – it’s tempting to say ‘doorsteps, porticos and architraving’, but is that appropriate? The English language is a wonderful thing, but if someone can tell me we have special words for the finer details of bird’s houses, I’ll be seriously impressed. 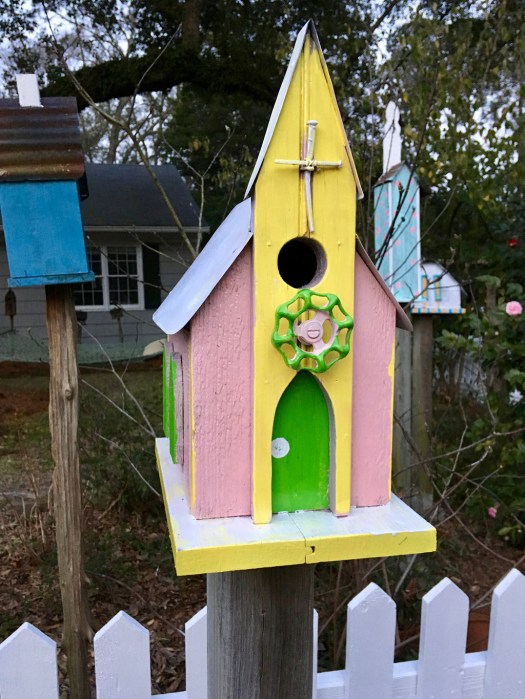 It’s tempting to mention the diminutive nature of the refurbishment (thinking of stature) were there not so many for her to update. The task would have seemed daunting to most of us, but she was relishing it. We’d caught Suzie at the early stages and I made a mental note to check on progress before leaving for home.

On the eve of my departure, one of my last treats was to try to beat the rapidly fading light and go back to take a few pictures. (I had been stalking some coral coloured quince blossom too, but was forced to pick between the birdhouses and the quince. Suzie, please note – you came first!)

We arrived at the house in the last few minutes of daylight but their pretty colours stood out against the gloom, lighting up the street. While they look wonderful all bright and clean, a few months of weathering will just make them sweeter.

I wish with all my heart I had even a single picture to share to show you how beautiful the journey was early next morning along the I-55 from Jackson, MS to Memphis Airport.

It was dark at first, but gradually the frost-covered fields, farmland and verges started to glisten. Tall grasses of various kinds, in large and small drifts, skirted the leafless deciduous trees, the trails of dead vines and evergreens silhouetted by the dawn. Mist lay in the hollows and hovered eerily over pools. We passed buttressed bald cypress trees, the clawed seed heads of wild sumac, and a slow, meandering stream. Early morning sunlight slanted over the whole, not golden that morning but silvered by the cold, nor falling evenly, but favouring some and leaving the rest obscure.

Piet Oudolf would have smiled.

40 Replies to “Bird House Refurbishment And A Hauntingly Lovely Journey”