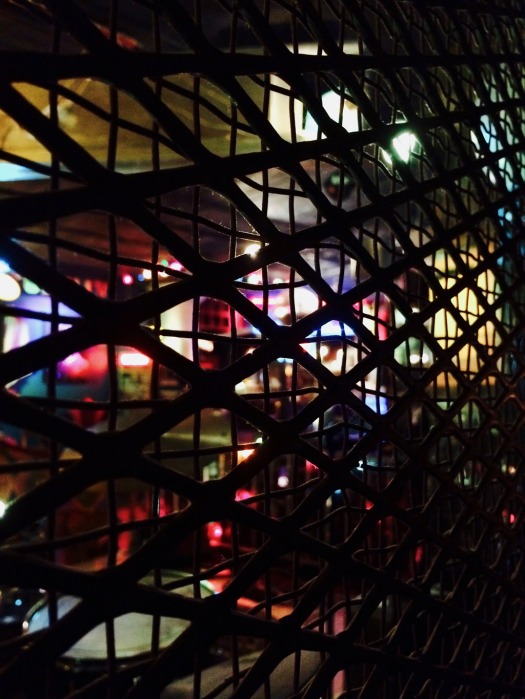 The weekly photo challenge asks us to share something that is layered, with depth, density or texture. My first choice is a view through a mesh screen into a cafe in St Louis’s City Museum. It’s not really called the City Museum of Fun, but it’s a play house for all ages, and a bewilderingly fertile gathering of inspiration and creativity.

How many galleries can you think of that hold family sleepovers – i.e. can persuade whole families to spend that much time in a museum? The longer I was there, the more I felt like my head was going to explode with impressions.

In the midst of the madness, the repose of these retro robots completely captured my heart – although I’d have felt a bit worried if the closest one had started shaking that cocktail shaker. I can be cautious when it comes to interior decoration, but these two can come and live with me any day. The pattern on the apron looks like it’s been dreamed up by some form of artificial intelligence and the coloured lights reflecting in the metal create a nice, vertical layering effect. 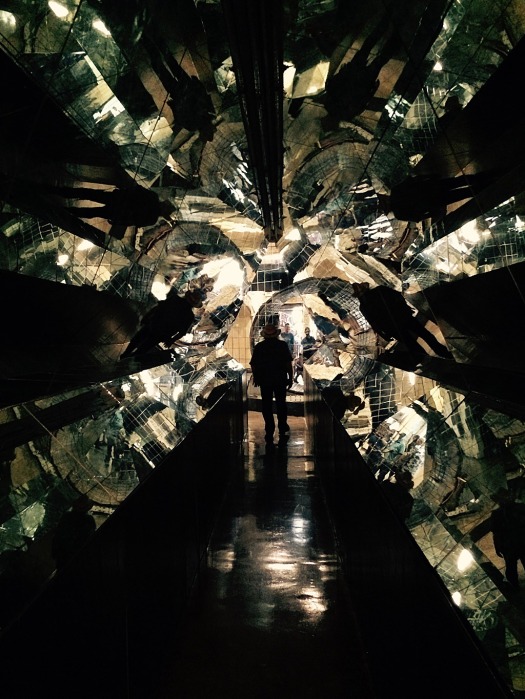 The mysteriously lit hall of mirrors, with its patterns and echoes, seemed to sum up the sensory overload I was feeling, after scrambling through tunnels, climbing, regularly losing my companion and being enchanted by some detail – texture, colour, material, sheer fantasy – everywhere I glanced.

Our visit to the City Museum had been a payback from the fates, which had peremptorily imposed an extra, unplanned overnight stay in St Louis by rendering our vehicle temporarily inoperable.

The first treat came from an 80 year old navy veteran, now a part time security guard, who gave us his bottle of water when he noticed we were stranded in the sunshine. Then a thoughtful taxi driver made us aware that the museum existed, determined that we would like it, and pretty much insisted that we find time to go there before leaving the city. The next day, some lovely ladies at the car repair shop not only announced they had fixed the car, but treated us to a spare City Museum ticket when they heard of our plans. Three acts of kindness, much appreciated, that will always colour my view of St Louis.

I’m wondering if this sculpture of a man clinging to a bubbled wall is by Tom Otterness – a number of his sculptures were on display there. I’m not familiar enough with his work to know for sure, but seeing the pieces in the City Museum made me want to find out more.

It would be lovely to go back to St Louis and do the whole museum again one day – hopefully without the pesky car troubles. And this time, I’d be better prepared – allowing much more than a squeezed-in hour and perhaps wearing the blinkers they put on race horses, to stop me trying to look at everything at once. If you’ve been to the City Museum, I’m sure you’ll know exactly what I mean. If you haven’t, as our taxi driver said, “you gotta go”.

27 Replies to “At The St Louis City Museum of Fun”