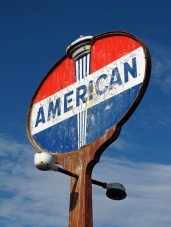 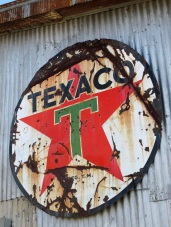 An old song drifted into my mind when I saw this week’s photo challenge prompt:

As I sit and bathe
In a wave of nostalgia
For an age yet to come.

That thought is perhaps best left dangling like a participle, though there is an oblique connection (trust me, there always is) to these oversized branding signs. They’re part of a past that I’ll never fully understand. I don’t know what DX stands for (I cropped the D out). I can’t even date them.

I used to see adverts and film segments on British TV showing American trucks pulling into American petrol stations, or teenagers hanging out in cars, getting soda from a drive-through that looked like a petrol station. In my naivety, I used to think this was nostalgia – that these scenes were retro-styled, hankering back to a loved, lost past. I didn’t realise it’s like that now. In places.

The present looks different, depending on where you are. American trucks really are L-shaped, with bonnets (hoods) like oversized cars. Sonics exist. No need for nostalgia – if a soda float floats your boat, it’s right here, right now.

But back to the signs and their context. Their bold colours and logos were once deployed to promote things, but today they’ve retired to the country. Together with a lot of old, corrugated tin and reclaimed wood, they now reside at one of the world’s most characterful B&Bs.

To quote the website of the Shack Up Inn in Clarksdale, Mississippi: ‘The Ritz we ain’t’. What they are is a magnet for blues lovers, culture historians – anyone with a creative spirit and an appreciation for the quirky.  Visitors experience the pared back – you might even say, the decrepit – as luxury. If your eye likes to play around with colours and distressed textures, you’ll be in your element.

The air hangs heavy with the names of people who have stayed in this place before you: Morgan Freeman, Pinetop Perkins, Ike Turner, Elvis Costello and Tom Waits have all made their way here. And it’s no surprise to see the lyrics “You may find yourself living in a shotgun shack” written on your door. In fact, if there’s an obvious comment for the visitors book, that’d be it. Well, that or “Love Shack”… were all the shacks celebrated in songs actually these shacks, I wonder? No, no, don’t get carried away, Susan. Though there is a very famous crossroads, just three miles up the highway.

The air in Mississippi has a sound all of its own.

15 Replies to “Red, White and Blues in The Delta”