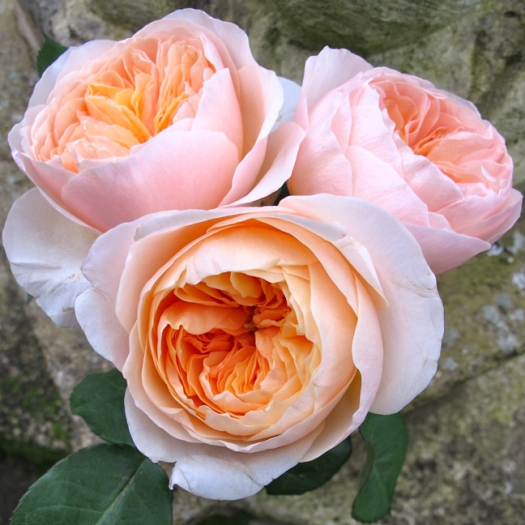 Imagine buying a bunch of roses. You’ve probably brought to mind a bouquet of classic hybrid tea roses – the ones with long, tapering buds and straight stems that are so widely available. I wonder if, like me, you’ve sometimes felt just a little disappointed when the buds fail to deliver their promise and fade away before they’ve really opened?

Behind the scenes, breeders have been developing a new type of cut rose, inspired by old garden roses. Often mistaken for peonies, these blowsy beauties are so far removed from what’s gone before that they’re almost like a new type of flower.

Cut garden roses are more expensive and florists who work with them need to have a little know-how: for example, unlike many other cut flowers, they don’t like to be misted. And even the top breeders will admit that their programmes are still a work in progress.

Combining fragrance with a decent enough vase life for the demands of floristry has proved particularly elusive. It’s a commonplace idea that we all have different tastes, but I’ve yet to meet anyone who would choose a scentless rose in preference to an identical one with a haunting fragrance.

One thing the breeders really have got down is the flower forms: these new roses all look as if they’ve been freshly snipped from shrubs in the garden. Over time, each plump flower bud will gradually open out into a full, rosette style bloom, with a decidedly antique character.

The first of these new varieties to really catch on was ‘Juliet’; a rose with wonderful, cupped, many-petalled flowers in an unusual shade of soft, peachy apricot that’s still very popular for floristry today.

I joined the company that bred it, David Austin Roses, as Head of Marketing, not long after its release. It had cost so much money to develop that we nicknamed it ‘the million pound rose’. For a few heady days following a particularly well-received press release, the UK press virtually besieged us, demanding comments, extra information and photo opportunities with our rose starlet. I was glad it was good news we were dealing with, not bad – and I remember wishing we had a few more roses to sell!

A little later, we invited a talented flower arranger, Claire Cowling, to give a floristry demonstration for visitors to the nursery. We’d promoted the event and had raised quite a crowd.

Claire began by creating a tapestry of fine-leafed foliage as a backdrop for her arrangement. After working deftly for a few minutes, she lifted up an old black plastic bucket, which we’d stuffed to overflowing with ‘Juliet’ roses, so she could begin to add them in to her design.

We’d unwrapped the rose buds, trimmed their stems and spaced them well apart in water a few days before the event, so they had time to open: we knew these roses would have far more of a ‘wow! factor’ once they’d reached their full, rosette stage.

As the audience saw the roses for the first time, a spontaneous gasp of amazement and delight passed around the room. It’s sadly not a sound we hear too often – I’m not sure I’ve heard anything to match it before or since. I looked down at my arms and realised they were covered in goosebumps.

We had become accustomed to these unusual roses, but through witnessing such a powerful response from the crowd, I was able to see their striking, rosette shaped blooms and pure, glowing colours afresh, through their eyes. It was clear we had something very special on our hands.

A decade later, though I no longer work with these beauties, the magic remains. I still smile with pleasure whenever I see ‘Juliet’ being used by designers around the world. I’ve gathered some of my favourite floral designs on a Pinterest board dedicated to ‘Juliet’ roses and a few other garden-style cut roses – take a look at them here.

I often wonder what makes this rose so alluring. It doesn’t have much fragrance, or the longest vase life, but it has something else in abundance: personality.

My sweetheart enjoys incorporating the Japanese concept of wabi-sabi in his garden landscapes. A direct translation is pretty much impossible: it includes ideas such as simplicity, natural beauty, transience, imperfection, blending old with new. Hearing him point out an example of this recently during a lecture made me wonder whether wabi-sabi might play a part in this rose’s appeal.

By reinventing a very traditional flower form in a contemporary shade of peach – a big departure from the original shades of pinks, whites and crimsons our grandmothers and their grandmothers would have known – ‘Juliet’ has a unique look that is just as fresh today as when it was first released.

You may not have noticed it before, but once you start to look out for it, you’ll be surprised how widely you’ll see it used in garden-inspired bouquets, arrangements and all kinds of floral designs, particularly for events and weddings. If you’re already familiar with it, there’s a good chance that like me, you’ve fallen for its charms.