We recently visited Memphis for one of the most eagerly anticipated gardening events in the American South: two days where 90 or so private gardens in the historic Cooper-Young district of Memphis throw open their gates to band-wearing members of the public.

While a suggested route took in many of the highlights, as first-timers, we decided to explore each quadrant as fully as we could. That’s not a light undertaking – Cooper-Young claims to host the largest garden walk in the Mid-South. If there’s one with a better mix of gardens of all styles and skill levels, or a more welcoming one, I want to see it.

The bird and flowers welcome sign was in the garden of a sweet couple who guided us around the ingenious layout of their front garden, keen that we should not miss anything. Gardeners often become collectors and I marvelled at how many plants, garden ornaments and paths they’d squeezed in.

An edgier sign a few streets away belied the warm welcome of an equally sweet gentleman, who, though we didn’t know it at the time, turned out to be a friend of our dear friend Robert. It’s a small world.

You may already be getting a feel for the character of this artsy neighbourhood. It’s just ten miles or so out from the famous Beale Street that attracts music lovers from around the world, but I wonder how many know to time their visit to catch another event, Cooper-Young’s grassroots music on the porch?

Going back to the Garden Walk, by wandering round so many gardens, visitors get a true flavour of outdoor living here. I’ve seen several showers and baths outdoors in the South over the years, but they always slightly surprise, then charm me. This idea does not fly in a row of Victorian terraces in NW England.

It was a treat to see plants that can’t survive winter outdoors in my part of the world, such as Campsis (trumpet vine, trumpet creeper) and Opuntia (prickly pears, rabbit ears cactus), the latter edged with buds that break into yellow flowers.

The towering spires of variegated Yucca filamentosa had arrived perfectly on schedule for the event. In another garden (where a tent was dressed as a hat with flowers and accessories) a huge clump of prickly pears were growing in front of a rose covered in spent flowers. That combination would have tickled my fancy when the rose was in full flower just a week or so earlier.

The event encourages gardeners of all levels of experience, fervour and skill so has grown steadily. As one gardener said, ‘They asked me, and I thought, why not?’

Many different plant combinations were on view including cottage garden plants I associate more with English gardens, such as ivory Campanula (bellflower).

If asked to name one plant that excelled in many of these gardens, it would be hosta. Hazarding a guess, this area is in a sweet spot where the climate suits both the hostas and creatures that prey on slugs and snails that lace the leaves in Lancashire gardens. Or else it’s the influence of the now sadly defunct American Hosta society.

Our attention is directed in ways we are barely conscious of. Every visitor to this event will go home with different pictures in their mind and camera, each image resonating in some way with their interests and personality. Many of my highlights are a little quirky, although I loved seeing this classic Yaupon holly poodle tree (a style known as Niwaki in Japan) with a grecian-style urn spilling flowers in the background.

A bench under a rose trellis has to be classic too, doesn’t it, even if the slats are painted purple?

While many southern gardeners embrace colourful seating, few people have a turquoise settee overflowing with plants. And the quirkiness continues elsewhere (follow up posts will show some gardens in more detail).

We saw many ways to engage with the natural world – plants to attract pollinators; birdhouses; chicken coops; windmills and wind chimes. One garden had a turtle, but we missed it. Mirrors, including long, slender ones at ground level, picked up and played with the light, making gardens seem bigger, brighter and leafier.

During the event, craftspeople, artists, florists, gardeners and members of societies (including, of course, the Cooper-Young Garden Club so central to the success of this event) waited patiently to engage with visitors. Some householders were represented by volunteer sitters (known as garden docents) who could explain their philosophy and highlight unusual plants.

We saw several thousands of plants in a wide assortment of containers.

Garden art of every style abounded in this creative neighbourhood. Watch out for a follow up post! 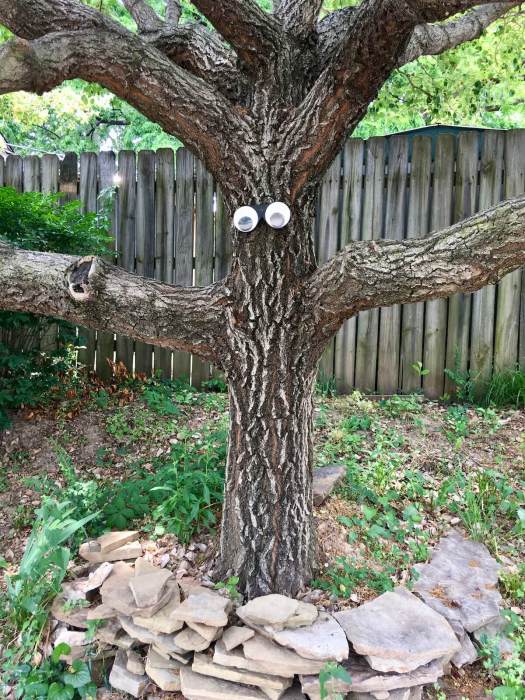 As a result, there were lots of ideas the everyday gardener could easily take home. Several gardens featured panels of ironwork used as gates, backdrops, or to inject style.

This snippet of barn red ironwork served to indicate a fence and, by being there, made a patch of greenery more photogenic.

Fences, walls and hedges enclose most English gardens, but it takes time for the English mind to adjust to the value of a short length of fencing that can easily be bypassed. Yet many fences are notional, to indicate a boundary and ask for it to be respected, rather than being unbreachable barriers. And the average American gardens is much larger than an English garden. How much material do you need to create an idea?

While gardeners look to professionals and formal flower shows for tips (American gardeners often tell me they’d love to visit the RHS Chelsea Flower Show) I was struck how many inspirational ideas could be found around these doorsteps.

There were no pressing crowds to make the event as gruelling as Chelsea can be, but rather a steady stream of visitors cheerily greeting each other as they passed. One host and organiser, Sharron Johnson, told me that nearly 200 visitors had explored her and her husband’s garden during the weekend.

Free libraries have popped up on many American streets but the Free Little Plant Stand at 1976, Evelyn Avenue, was a first for me. Facebook followers get notifications of new batches of plants or seeds. It’s a great idea as many gardeners have plants that produce more offspring than they can home.

So would I recommend this event? Wholeheartedly, and not just for garden lovers looking to enjoy a couple of days of inspiration in the company of other enthusiasts.

It’s a great way to gradually raise the kerb appeal of an entire neighbourhood, to build a sense of community and make an area more fun to live in. The world needs more Cooper-Young-style Garden Walks.

I’m linking my post to the lovely Jo’s Monday Walk hosted here on WordPress. I’ve not gone exactly by the book, because a walk implies an order – a journey from a to z – and the gardens are shown in random order. While that part’s gone awry, it was most certainly a walk as our feet could attest by the end of the weekend. (The Backbeat Tours Shuttle Bus was available for people less keen or able to walk, and bicycles were encouraged.)

To make amends, I’m ending in the traditional way, with food. The South prides itself on its warmth and hospitality which was very much on show here. Unlike British events, light refreshments were provided free, occasionally accompanied by a charity donation box. The homeowners at the flowering yucca house pressed us to join them for burgers from the grill that looked and smelled very tempting, plus salad, plus freshly picked strawberries. In retrospect I’m far from convinced we should have turned them down, even though there were gardens still to be seen.

Water dispensers were widely available and very welcome in the heat, some with added ingredients such as fresh pear or basil. I sampled flavoured teas and was offered a cookery book worth of home-made cookies. A melting lemon cookie was memorable, melting not in the hand, but on contact with the mouth. There was a lime one too, and I would have liked to try them both had British reserve not held me back.

I’m sure an official Cooper-Young Garden Walk roundup will soon appear on their blog and you can check out previous years.

All pictures were taken during the 7th Annual Cooper-Young Garden Walk in May 2022, but may feature gardens visible from the street that were not officially open. Apologies to the many people not acknowledged or celebrated here. Feel free to leave a comment below if you’d like to claim your garden or correct any mistakes, or get in touch and I’ll update the post.